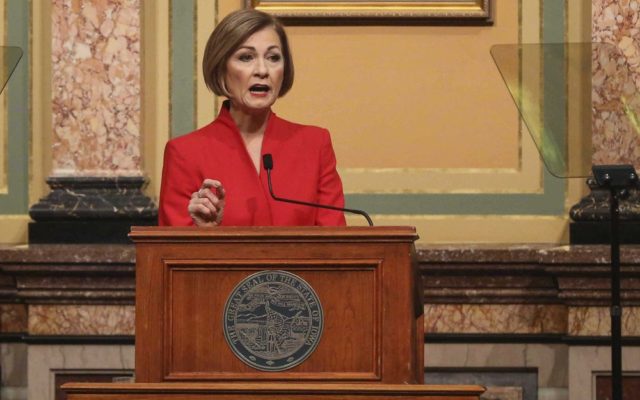 (Radio Iowa) Governor Kim Reynolds says by the end of her new four-year term, she hopes to get rid of Iowa’s state income tax.

“I’ve got South Dakota to the north of me, so we’ve got to get to zero,” Reynolds says, “so we’re going to keep working on that, too.” Reynolds made the comment on a Republican Governors Association panel.  South Dakota has no personal income tax or corporate tax and mainly relies on property taxes and sales taxes to fund government operations. Reynolds has just been elected chair of the Republican Governors Association for the next two years. Reynolds reviewed her education priorities for the group.

“We did open enrollment, we expanded charter schools and I’m really excited about implementing ‘school choice’ this next election cycle, so that’s my top priority,” Reynolds said, “so hopefully we’ll get that done.” Reynolds has tried in each of the past two years to get the Republican-led legislature to approve state scholarships for some students who switch from a public to a private school. During the 2022 campaign, Reynolds has said her goal is for all parents to have the choice of sending their child to a private school, but she has not outlined the details of this new plan. House Democratic Leader Jennifer Konfrst says Democrats will oppose any bill that shifts money from public schools to private schools. It’s not clear yet whether Reynolds has enough Republican votes in the Iowa House to pass her latest plan. Some House Republicans who oppose the school choice concept either did not seek reelection or were defeated in GOP primaries.