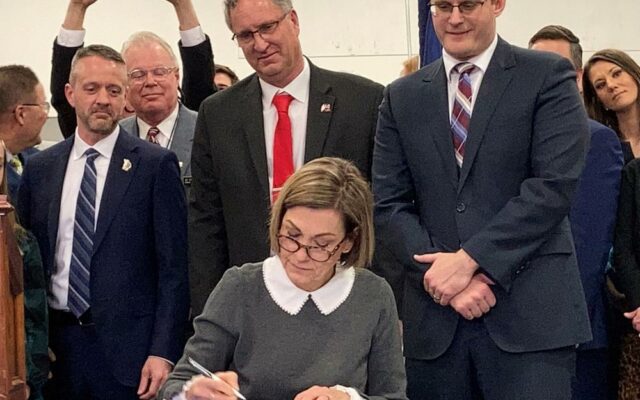 DES MOINES, IA (Radio Iowa) Governor Kim Reynolds is calling on Christian conservatives to lobby Republicans in the House to pass a bill that provides state scholarships for 10-thousand students to attend a private or parochial school.

“We need to get it done and it’s just common sense and it’s a fairness issue, so help me get it across the finish line,” Reynolds said, to applause.” Reynolds was among a handful of Republican office-holders who spoke to hundreds of the Iowa Faith and Freedom Coalition members on Saturday night.

“We need to give more parents the option to find a school that fits the unique needs, the moral commitments and the religious convictions of their family,” Reynolds said. Thirty-one Republicans in the Iowa Senate have passed a bill to send 55-hundred state payments to low and moderate income Iowa parents who enroll their kids in private schools, but the bill has yet to be debated in the Republican-led Iowa House. In Saturday night’s speech, Reynolds reviewed a list of other school-related measures that have already been enacted.

“We got our kids back in the classroom and we did it before anybody else. We banned mask mandates and we said, ‘No!’ to woke culture,” Reynolds said, to loud cheers. The governor also discussed proposals pending in the legislature that require schools to list library books and require teachers give advance notice online about what books, articles and other materials they plan to use in the classroom.

“I can tell you without hesitation when parents are informed, they make informed choices, but that is only part of the solution and that is why I’ve asked the legislature to expand school choice,” Reynolds said, to cheers. This is the second year Reynolds has asked the Republican-led legislature to create a program that sends state money to parents who enroll their children in private schools. Critics say once the program is established, it will become an ever-expanding entitlement for private school parents and siphon state resources away from public schools.