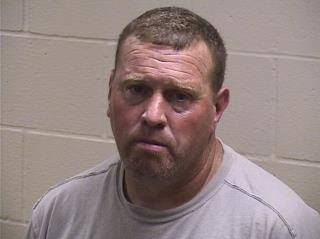 Authorities with the Ringgold County Sheriff’s Department took a Delphos, Iowa man into custody on Thursday on suspicion of theft of multiple high-dollar items.

The Sheriff’s Office says 44-year old Scott Thurman is alleged to have been discovered with an abandoned trailer. Officers discovered the VIN number had been removed, however they were able to track the origin of the trailer and discovered the owner KC Nielsen Limited had reported the trailer stolen on June 21st off their dealership lot in Laurens, Iowa. Two new John Deere zero turn mowers and a pickup hooked to the trailer were also reported stolen from the dealership.

KC Nielsen Limited also reported their Harcourt, Iowa store was missing a Bobcat skid loader, which was discovered a few miles from the abandoned trailer in Redding, Iowa.