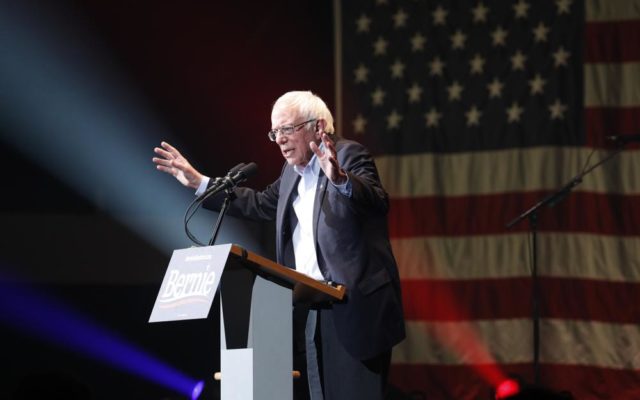 FILE - In this Feb. 1, 2020, file photo, then-Democratic presidential candidate Sen. Bernie Sanders, I-Vt., speaks at a campaign rally in Cedar Rapids, Iowa. Sanders has long argued that steep federal spending and bigger government can improve the lives of working class Americans and win back the kinds of disaffected, largely white voters who flocked to Donald Trump. The Vermont senator is venturing into Trump country to test that theory. (AP Photo/John Locher, File)

“This is the moment that tests our mettle. Do we stand and fight?” Sanders asked the crowd. “We will and we’re going to prevail.”
Sanders spoke Sunday afternoon in downtown Cedar Rapids. Sanders says the bill offers solutions to a range of problems like climate change as well as a lack of child care and affordable housing. He describes it as the most significant piece of legislation since the so-called New Deal of the 1930s.

“So many good people are struggling economically to provide for their families and when half of our people are living paycheck to paycheck, we can do better than that,” Sanders said, to cheers. Sanders also cites the bill’s proposed expansion of Medicare to cover dental visits, hearing aids and eye glasses. Sanders says all these items are within reach if the country’s wealthiest citizens pay their fair share in taxes. Republicans say Iowans won’t be distracted by the Democrats’ spending agenda when American lives are in danger in Afghanistan.