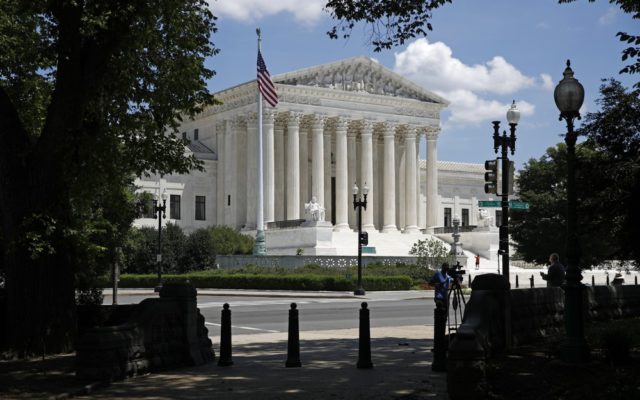 FILE - In this June 29, 2020, file photo, the Supreme Court is seen on Capitol Hill in Washington. President Donald Trump is preparing to release a list of potential Supreme Court nominees. It's a list that will give voters something to compare to rival Joe Biden’s promise to nominate a Black woman to the high court if given the chance. (AP Photo/Patrick Semansky, File)

“I’ve let people know for 40 years where I stand on Roe,” Grassley says. “I’ve had the same position for decades.” But Grassley says there’s no way to predict any of the Supreme Court nominees he’s supported recently would vote to overturn the 1973 ruling that legalized abortion.

“It is possible that they would and that’s it,” Grassley says, “but there’s no way members of congress can control what people do once they get on the bench. ”

“You don’t aim for any outcome in choosing anybody to be on the Supreme Court,” Grassley says. “I look for strict constructionists. People who are going to interpret law, not make law.” Last (Monday) night, Politico published the leaked draft of an opinion indicating five justices had voted to overturn Roe v Wade.

“The leak was surely a monumental breach of trust within our judicial system and hasn’t happened within my years in the Senate,” Grassley says. Grassley says he won’t speculate on what abortion-related restrictions Republican-led congress might pass if the leaked document matches up with the opinion the court releases. Grassley drew cheers a month ago in a speech to the Iowa Faith and Freedom Coalition when he discussed his influence in shaping the Supreme Court.

“You know we might have an opportunity here before the end of June for the Supreme Court either by a 6-3 vote or a 5-4 vote to overturn Roe v Wade,” Grassley said. “You probably my remember my role in not moving ahead with the Garland nomination, not holding a hearing on it because we were hoping we’d get a Republican president and we did get a Republican president…and overturning Roe v Wade is a real possibility now.” Two of the Democrats who hope to run against Grassley in the General Election say the future of women’s rights is at stake. Mike Franken says the pending decision is not a partial rollback, but one of the most disastrous decisions the court has ever made. Abby Finkenauer says like millions of women across the country, the news Roe is likely to be overturned makes her scared and sick and ready to defend reproductive rights.