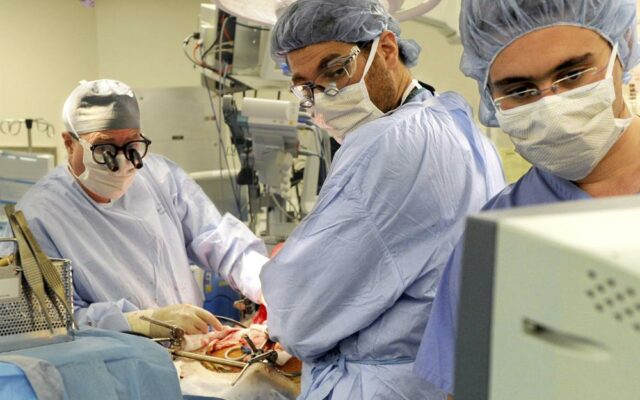 FILE - In this Sept. 13, 2011 file photo, Columbia University Medical Center Transplant Services surgeons watch a monitor as they perform a liver transplant at New York-Presbyterian Hospital in New York. Long-delayed rules that will more broadly share scarce donated livers go into effect Tuesday, Feb. 4, 2020. The aim is to make the wait for livers, and eventually all organs, less dependent on your ZIP code. (Keelin Daly/Hearst Connecticut Media via AP, File)

U.S. Senators Roy Blunt of Missouri and Jerry Moran of Kansas issued a joint statement in response to the release of documents, including emails between the United Network for Organ Sharing and organ procurement organizations, regarding the national liver allocation policy.

The emails were released in response to a November ruling by the U.S. Court of Appeals for the Eleventh Circuit against the Department of Health and Human Services’ contractor for organ procurement and transplants. The Court found the organizations failed to live up to is production obligations to release documents that show personal opinions about the merits of living in different regions of the United States.

Senators Blunt and Moran say the emails show a pattern of collusion that favor certain states at the expense of those in the Midwest and South, which are predicted to see a substantial decrease in organ availability. The emails further include profane and disparaging comments about people living in the South, which the Senators say demonstrates a clear bias against these areas in the policymaking process.

Blunt and Moran have called on the Department of Health and Human Services to immediately reverse its implementation of the misguided liver allocation policy.