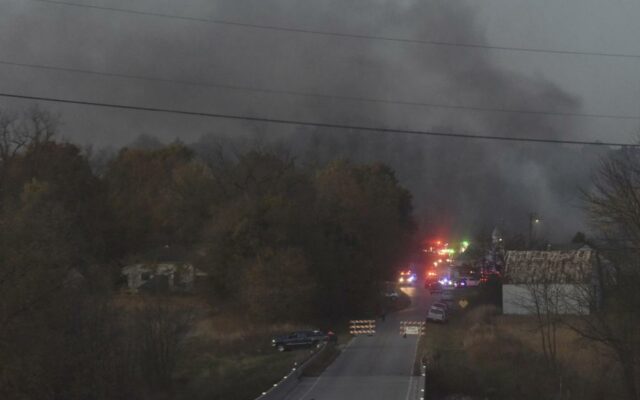 WOOLDRIDGE, Mo. (AP) — Roughly half of a small Missouri town burned Saturday after a wildfire spread quickly from a farm field and destroyed or heavily damaged 23 buildings, officials said.

No one died and only one person was taken to a hospital for an injury that was not life-threatening, but the entire town of Wooldridge had to be evacuated Saturday because of the fire. The blaze was sparked in a field by a combine that was harvesting crops. A nearby stretch of Interstate 70 had to be closed for nearly two hours Saturday evening because of heavy smoke.

Cooper County Fire District spokesman Jim Gann said Sunday that between 4.6 and 5.4 square miles burned before the fire was brought under control. Firefighters were working Sunday to keep hot spots under control with strong winds forecast in the afternoon.

Wooldridge is a town of less than 100 people about 20 miles (32 kilometers) west of Columbia along the Missouri River. Stephen Derendinger, an engineer with the Jamestown Rural Fire Protection District, said half the town is burnt.

Elsewhere in Missouri Sunday, some Kansas City area residents were being urged to evacuate because of a grass fire near Interstate 470 and Raytown Road between Raytown and Lee’s Summit.

Kansas City Police spokeswoman Officer Donna Drake said police were called to the area around 11 a.m. Sunday and started knocking on doors to let residents know about the fire. Drake said the blaze started as a mulch fire at a business before spreading quickly toward a neighborhood.

The Missouri State Highway Patrol shut down Interstate 470 in the area Sunday afternoon for a couple hours because visibility was poor and fire had spread to both sides of the highway.

High winds and dry conditions helped the fire spread quickly. Kansas City Fire Chief Donna Lake said the fire began on the south side of I-470 before the wind carried embers from the initial fire over the highway and started a second fire in a wooded area north of the highway.

Drought conditions are common across Missouri and the National Weather Service warned about high winds in the northwest corner of the state Sunday, creating conditions ideal for wildfires to spread.