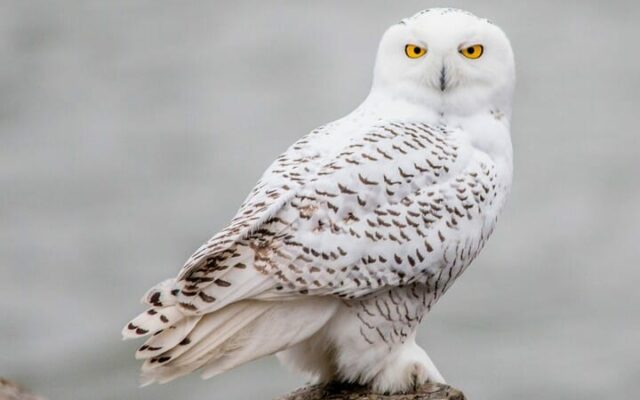 (Radio Iowa) A bird that lives in Canada has been sighted in Iowa this winter. DNR Avian Ecologist, Anna Buckardt Thomas, says the snowy owl will occasionally range into our state.

“Snowy owls breed in the Arctic Tundra in Canada. And when we see them in Iowa — it’s often because they’ve had a really great breeding season the summer before,” she says. Thomas says they are getting more notice because there seems to be more around this year.

“It’s pretty typical to see at least a few each year — but it seems that we are having a few more than normal,” according to Thomas. She says they could be seen almost anywhere in the state.

“I’ve heard of reports in the Ames area and the Cedar Rapids area and all over the state so far. So, they are definitely around, it’s just a matter of getting lucky and coming across one,” she says. Thomas says the snowy owls like the flat tundra-type land that they’re used to up north.

“And so they are often found in open areas. And they usually like shorter grass areas. So, they might be found at an airport where there are lots of short grass in a large area. They may be found in agricultural fields,” Thomas says. “And you never know — but they are most likely going to be in some of that open habitat — not necessarily in a forest.” She says you could spot them for the next several weeks.

“They stay through the winter, it really just depends on the temperatures we get this winter and the food sources they can find, as well as when spring occurs. We probably could see them through February for sure.” Thomas says if you spot a snowy owl — give them space so they are able to hunt undisturbed. Do not approach an owl unless it is obviously injured or struggling to fly, and always consult a licensed wildlife rehabilitator before intervening. And you can contact her if you happen to find a dead bird.

“We’re interested in understanding different species and kind of a cause of death and why we might be having mortality events. So, if you do find a dead snowy owl, please contact the Iowa DNR,
Anna Buckardt, the avian ecologist, or our wildlife veterinarian Doctor Rachel Ruden, and we are happy to pick up that bird and learn more about what is going on,” Thomas says. You can contact her at:  [email protected]