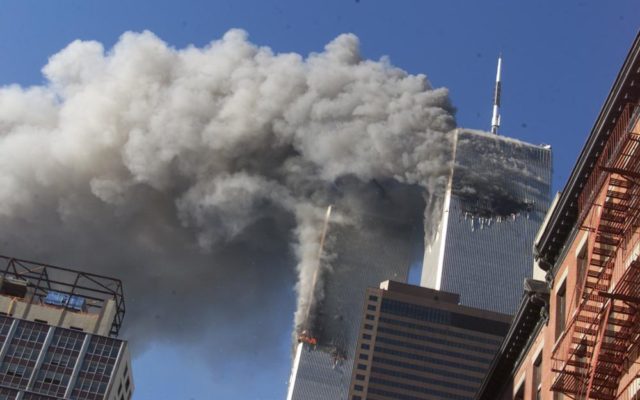 FILE - Smoke rises from the burning twin towers of the World Trade Center after hijacked planes crashed into the towers on September 11, 2001 in New York City. Associated Press photographer Richard Drew talks about AP’s coverage of 9/11 and the events that followed. (AP Photo/Richard Drew)

(Radio Iowa) Events were held throughout Iowa to mark the 20th anniversary of the September 11th attacks. While many have vivid memories of that day, it’s all history to students in elementary and high school school who weren’t born yet. Jordan Pollack, a teacher at West Delaware High School in Manchester, shares his own recollections to engage with seniors in government class.

“I was actually in 8th grade when it happened, so I was a student,” he says. “So I kind of talk to my students about (being) on the bus and I heard something and then we got to school and then we basically watched footage of it the rest of the day.” Pollack also talks about the junior high football game that Tuesday night 20 years ago.

“I remember feeling kind of weird, like something huge happened,” he says, “but we’re still doing this really normal thing, like going to a middle school football game.”
Corey Coates, who’s also a social studies teacher at West Delaware High School, says he has a distinct memory about football practice for the high school team that afternoon, as they all realized there were no planes or contrails in the sky. Coates says he starts a class conversation about 9/11 by showing some short videos of the attacks.

“Many students have never actually just watched any footage from the day,” he says. “So many of them are just so surprised to actually see a plane hitting the building and so then we debrief about those things and that’s usually then when I go into my conversation about my experience.” On September 11th, 2001, Coates had just started his 6th year of teaching and was gathering with students in the school annex as classes were about to start on that Tuesday.

“I just remember some of my students coming in and saying: ‘Mr. Coates, what on earth is going on?’ and I just grabbed a yellow (legal) pad…and I just started to write,” he says. “…I just tried to process with the kids as the whole day went on.” Coates and Pollack say students understand something monumental happened and some compare 9/11 to Pearl Harbor, but both teachers say it’s hard for students who weren’t alive in 2001 to fully comprehend the magnitude and scope of the attacks.