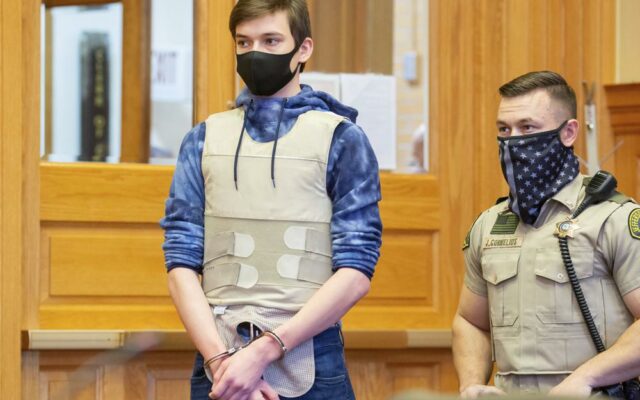 FILE - Willard Noble Chaiden Miller is escorted into a bond review hearing at the Jefferson County Courthouse in Fairfield, Iowa, in this Nov. 23, 2021 file photo. Jeremy Everett Goodale and Willard Noble Chaiden Miller, two southeast Iowa teenagers are charged with first-degree murder and conspiracy to commit murder in the death of their high school Spanish teacher. Christine Branstad, the attorney for Miller filed on Wednesday, Dec. 9, documents asking the judge to transfer his case to juvenile court saying he was 16 at the time of the alleged acts. (Zach Boyden-Holmes/The Des Moines Register via AP, File)

DES MOINES, Iowa (AP) — The attorney for an Iowa teenager charged as an adult with first-degree murder and conspiracy to commit murder in the killing of his high school Spanish teacher has asked a judge to try the 16-year-old as a juvenile.

If convicted as a juvenile, Willard Miller could be released in less than 24 months, something prosecutors said would not serve the interests of the community or the suspect.

Attorney Christine Branstad on Wednesday filed documents asking the judge to transfer Miller’s case to juvenile court, saying he was 16 at the time of the alleged acts.

“Miller has no prior juvenile court or district court involvement,” she said. She requested a report from juvenile court services be ordered and that the judge set a hearing to determine whether the case should be transferred to juvenile court.

Jefferson County Attorney Chauncey Moulding responded in court documents that state law allows the exclusion from juvenile court of suspects 16 years or older accused of a serious felony, unless good cause is shown.

“Because of the nature of the allegations, the undersigned argues there could be no reasonable prospects for rehabilitating the child in the juvenile court system before the defendant turns 18 and ‘ages out’ of that system. Such an outcome would be outside the interests of the juvenile and the community at large,” he said. “The state believes there is no reasonable prospect of rehabilitating a premeditated murderer in less than 24 months.”

He said the state does not oppose a report being prepared by a juvenile court officer.

Miller and Jeremy Goodale, also 16, are being held on $1 million cash bond in juvenile detention facilities awaiting trial. Both have pleaded not guilty.

They are accused of killing 66-year-old Nohema Graber in Fairfield. Graber was reported missing Nov. 2 and her remains were found later that day in a park. Authorities said she suffered “inflicted trauma to the head.” Her body was found concealed under a tarp, wheelbarrow and railroad ties at the Chautauqua Park in Fairfield, about 95 miles (150 kilometers) southeast of Des Moines.

Authorities haven’t disclosed a motive for the killing.

In a court hearing earlier this month, prosecutors said the teens “engaged in an extremely brutal murder of an innocent person.”

Police said in court documents that Goodale posted details about planning the killing on social media. The documents indicated police investigators found clothing that appeared to contain blood at the teens’ homes.

Documents also said Miller admitted to being at the park when Graber was killed and to providing materials used to kill her and conceal her death.

Both teens attended Graber’s Spanish class at Fairfield High School, where she had taught since 2012.

Judge Joel Yates has scheduled their trial to begin April 19.