Tuesday is the 175th anniversary of Iowa or, as they used to say, Ioway 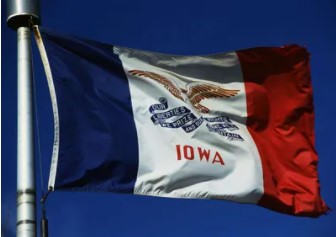 (Radio Iowa) Tuesday is statehood day. Iowa became a state on December 28th, 1846 — so this is Iowa’s 175 anniversary. owa hasn’t always been the word residents have used to refer to the state.

You hear this word in the lyrics of the Iowa Corn Song. The song was written in 1912. Leo Landis, curator at the State Historical Museum, says Ioway was not only spoken and sung, but it was printed in newspapers. “Ioway was almost as common if not a more common pronunciation for our state into the early 1900s,” Landis says. “I’ve seen a Cedar Rapids Gazette article talking about that transition in the 1920s, where you stop hearing, ‘Ioway.'” Landis says many states are named for native peoples. Albert Miller Lea, the soldier and engineer who conducted a survey of an area of the Midwest in the 1830s referred to the Iowa District of the Wisconsin Territory. “That’s how the Ioway Nation, indigenous peoples to our state, get associated with the land that we know as Iowa today,” Landis says. Iowa was first proposed as a state in 1844, with a northern border that would have extended up to an area that is today known as the Minnesota Twin Cities.

“The federal government didn’t feel like that was a manageble size of a state, didn’t want a state that large, so rejected one of the early bills on statehood,” Landis says. While Iowa was admitted to the union in 1846, there was a dispute about the southern border with Missouri.

“Missouri had tried to claim some of that land. There’s the small Honey War issue in the territorial period,” Landis says. “That was still being disputed into the 1850s, with a Supreme Court ruling finally establishing, firmly, what our southern border is.” Landis says the first big celebration of Iowa’s statehood was held in Muscatine on July I4th, 1888. It marked the 50 years of Iowa as a U.S. territory, then as a state. Newspaper accounts from the time described the day’s promising beginning and Mother Nature’s intervention at the end.

“They had a beautiful parade and pageant in the morning and they were shooting off cannons,” Landis says. “Then that night…it was in July, we get a lot more thunderstorms in Iowa…the barge that has the fireworks in Muscatine is sunk. They can’t save anything. The buildings with the bunting, the bunting is being blown away.” The Iowa legislature appropriated 10-thousand dollars for a celebration of the 50th anniversary of Iowa’s statehood. It was held in Burlington, in October of 1896, and Landis says newspaper accounts described what happened during the opening day’s parade.

“The reviewing stand collapses while the parade is going by with Governor Drake, Vice President of the United States Stephenson…People up front are pretty well protected, so Governor Drake and Vice President Stephenson escape with bruises and scratches, it’s described, but regrettably former Governor Sherman breaks his leg,” Landis says. “…The Davenport Times has a really great story, one side of the newspaper talking about the beautiful celebration that’s taking place and then talking about a calamitous accident.” Landis says celebrations on the actual date of statehouse are uncommon because Iowa’s weather on December 28th is often less hospitable for gatherings. Landis says there are some important items in the State Historical Museum from the state’s territorial and early statehood period.

“Artifacts like a drawing by Wacochachi, a Meskwaki elder who was living in Scott County and was friends with George Davenport as so, as a gift in the 1830s to George Davenport, drew animals that were sacred to the Meskwaki — still are sacred to the Meskwaki — and also some events from his life,” Landis says. An exhibit at the State Historical Museum titled “You’ve got to know the territory” includes materials from Territorial Governor Robert Lucas and his wife, Friendly Lucas.