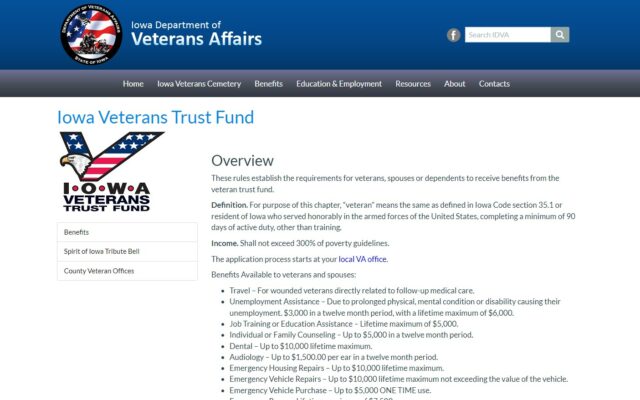 (Radio Iowa) The fund that provides Iowa veterans with financial help is out of money for the fiscal year. The Iowa State Veterans Trust Fund provides emergency assistance for things like medical care and equipment, home and vehicle repairs, and counseling. Karl Lettow, spokesman for the Iowa Department of Veterans Affairs, says it’s the first time the fund has run out of money. That’s because in January 2021, the veterans commission increased who could qualify in response to rising costs.

“These changes adapted the program to increase eligibility to funds for veterans and military families,” Lettow says. “The increased need subsequently created an unprecedented influx of application requests for assistance.” The Iowa Commission of Veterans Affairs won’t be accepting applications for the fund until it’s replenished. Its entire allotment of 500-thousand dollars has already been spent.

“This has been a great fund,” Lettow says. “It’s done a lot of people a lot of good and anything we can do to keep it flowing is going to be helpful to veterans.” Lettow says the commission will likely ask state lawmakers to increase the amount allowed in the fund annually in the upcoming legislative session. The fund is financed through the Iowa Lottery, not taxpayer funds. He says they’re looking for alternate solutions to add more money to the trust fund until the new fiscal year starts next July.