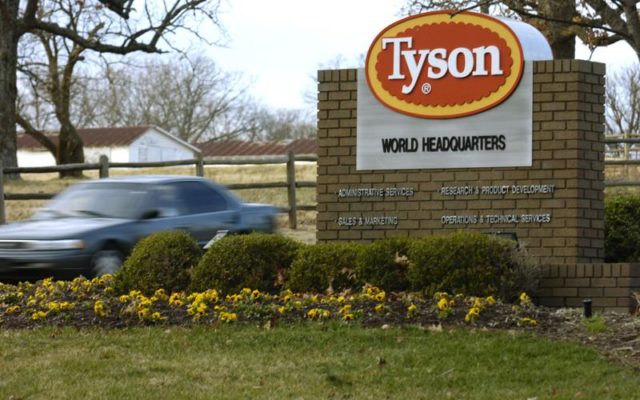 FILE - In this Jan. 29, 2006, file photo, a car passes in front of a Tyson Foods Inc., sign at Tyson headquarters in Springdale, Ark. Tyson Foods is recalling almost 4,500 tons of ready-to-eat chicken products after finding the products may be tainted with listeria bacteria. The U.S. Department of Agriculture announced the recall Thursday, July 8, 2021 after two consumers reported falling ill with listeriosis. (AP Photo/April L. Brown, File)

(Missourinet) American companies have been using a variety of incentives to recruit and retain workers. Tyson Foods is handing out 50-Million dollars in year-end bonuses to its employees. The company has several food processing plants in Missouri, including in Concordia, Dexter, Monett, Noel, St. Joseph, Kansas City and Sedalia, employing about 5,600 Missouri workers. Tyson spokesman Derek Burleson says the bonuses in part are a thank you for all those employees who kept coming to work, even during the coronavirus restrictions. . .

Tyson has spent more than 500 million dollars in wage increases and bonuses for frontline workers over the past year.