Use of Delivery Robots to be Legalized in Iowa this Summer 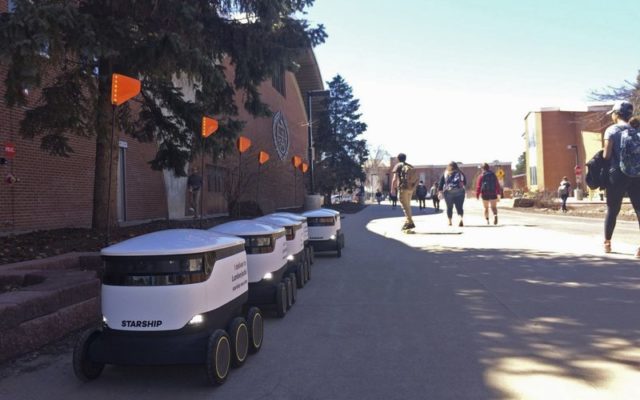 In this photo taken March 25, 2019, a row of food delivery robots awaits pickup orders outside the student union at Northern Arizona University in Flagstaff, Arizona. Dozens of cooler-size robots on wheels have begun rolling around the university's main campus in Flagstaff to deliver meals from Einstein Bros. Bagels, Cobrizo Mexican Grill and other retailers to hundreds of students a day. (Svea Conrad/Arizona Daily Sun via AP)

Iowa is joining a growing number of states making it legal to use robots for deliveries in areas where foot traffic is allowed, like sidewalks and crosswalks. They’re called PDDs — personal delivery devices. Representative Rob Bacon of Slater says under the new law, the maximum speed for a delivery robot is no more than six miles an hour on a sidewalk or pedestrian area.

“If there are no sidewalks, the little PDD can operate on the left side of the road,” Bacon says. A delivery robot will be allowed travel 20 miles an hour on a street — but may only operate on street with posted speed limits of 40 miles an hour or less. The delivery robots can be no more than 500 pounds — before any cargo is added — and the robots must be operated or supervised remotely by a live person. Representative Dave Williams of Waterloo says P-D-Ds are being tested in a handful of U.S. cities before delivery robots would see wider use.

“I expect we’ll be back here perfecting this before that happens,” Williams says, “and I hope it happens in Bondurant before anywhere else.” An Amazon fulfillment center opened in the Des Moines suburb late last year. Amazon’s six-wheeled robot is called Scout. The FedEx delivery robot is called Roxo (ROCKS-oh). The companies envision driving a truck load of personal delivery devices to an area and releasing the robots to travel the final segment of the delivery route. Iowa cities and counties will not be allowed to impose regulations on delivery robots that are stricter than the new state regulations. Governor Reynolds signed the bill this month and the law goes into effect July 1st.