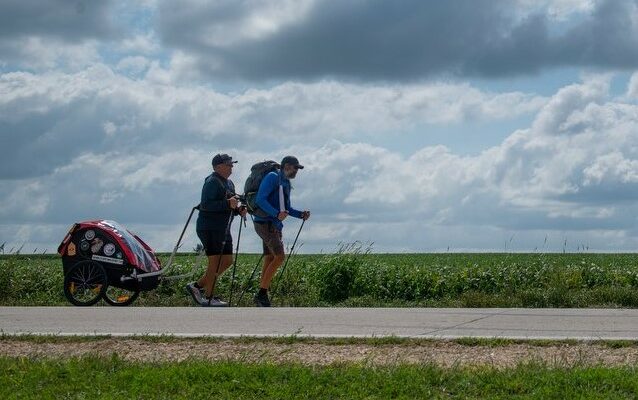 (Radio Iowa) Two veterans who call themselves Team Long Road are making their way across Iowa as part of a cross-country journey from Boston, Massachusetts to Newport, Oregon. They’re calling attention to American soldiers who remain missing in action. Justin “J-D” LeHew says he and Coleman “Rocky” Kinzer started their journey on June 6th, and last week passed through cities including Dyersville, Manchester and Independence, headed west.

“There’s 81,000 missing in action servicemembers still, and 40,000 approximately are lost at sea, so that leaves another 40,000 that are recoverable on land on battlefields the U.S. has been in,” LeHew says. “We tell people that number and it’s shocking to them that we have that many still missing. So we’re out here raising that level of awareness.” Both are retired U-S Marines and they say taking this long backpack journey has been an amazing experience.

“You spend a quarter century defending a nation, it’s really cool to be able to walk through the heart of it and meet the people that have come before you and defended this nation, meet the people that make this nation great,” LeHew says. “Here we are in Iowa, feeding the nation, among other things. Seeing all this stuff is really what kind of strikes home and get you right here.” The two are following the historic U-S Highway 20 for the entire stretch – not only in Iowa, but across the country. They hope to be back home by Christmas. Learn more about the trek at TeamLongRoad.com.