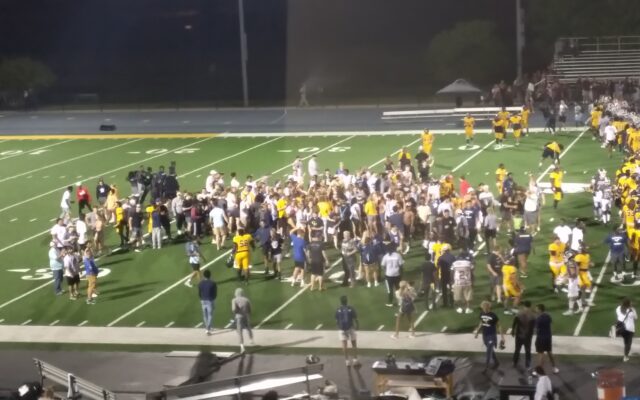 Graceland football ended a 30-game losing streak that spanned 1,407 calendar days Saturday night and erased a 21-point deficit in the first half as the Yellowjackets won their home opener over the Evangel University Valor 46-35 in front of a big crowd at Huntsman Field.

The 21-point deficit was assumed after Evangel took advantage of a fumbled punt return and good field position to score their first two touchdowns about 9 minutes into the game. The lead ballooned to 21 points after the first of two long Dillon Hester receptions with 12 minutes remaining in the 2nd quarter. But Graceland began to turn the tide with a 65-yard drive and 7-yard touchdown pass to Gerald Monroe with with 7:24 to play in the half, and then the defense got going. Matthew Hall intercepted a pass a little over a minute later for a pick-6 and Graceland kept that momentum into halftime. While Graceland missed the extra point, the defense forced a 3-and-out, and the offense ended the half with a 15-yard pass to Gerald Monroe with just 6 seconds remaining in the half. Graceland missed the two-point conversion, but the game was back on with Evangel leading 21-19 at half.

It was Evangel that scored first in the second half when a first down run after catch resulted in a Graceland fumble early in the 3rd quarter. Athanie Leevirapham returned the fumble 42 yards for a touchdown and a 28-19 Evangel after the extra point, but Graceland’s punt coverage team and defense then provided a total momentum reversal. An errant punt snap allow Kyrin Cannon to block a punt that was returned for a touchdown to get Graceland back within 28-25. John L’Heureux provided a second pick-6 for Graceland, returning an interception 45 yards for a touchdown and a 32-28 lead. Graceland’s defense provided more good field position when Gunner Hollis returned an interception to Evangel’s 35-yard line. Given the field position, Graceland punched in a 7-yard run from Adarius Thomas for a 39-28 lead after the extra point.

Evangel’s Dillion Hester caught a 69-yard-pass on the final play of the 3rd quarter to make it a 39-35 game going into the 4th, but Graceland got the two-score lead back when Cade Ross found Reggie Wilson while being flushed from the pocket and Wilson sprinted down the sideline for a 63-yard touchdown and Graceland had a 46-35 lead with 11 minutes to go. Graceland’s defense then held to force a punt once and stopped Evangel twice on 4th down in the final 8 minutes. The final 4th down stop came at the Graceland 5-yard line.

Both teams had over 400 yards of total offense. Graceland had 424. Quarterback Cade Ross was 29-56 for 382 yards and 3 touchdowns. Reggie Wilson had 7 catches for 185 yards and a touchdown. Gerald Monroe had 11 catches for 88 yards and 2 touchdowns. Tre Blake had 87 yards receiving.

Graceland’s win was their first since October 27th, 2018. Graceland heads to Marshall next Saturday to face Missouri Valley.