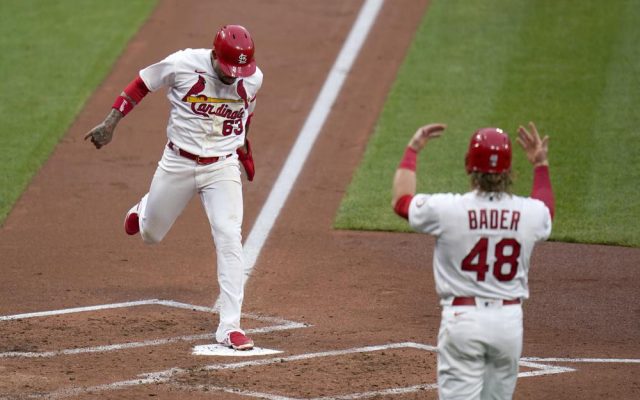 Tommy Edman added three singles and drove in two runs for St. Louis. which returned home after dropping three straight at the Padres to win its fourth consecutive game this season against Pittsburgh.

Arenado hit his 10th homer in the first inning. With two outs, Arenado sent a 2-0 pitch into the left-field seats to score Dylan Carlson, who drew a walk.

“That’s a tip-your-cap pitch,” losing pitcher JT Brubaker said. “I felt like I made a good pitch there. He leaned out and pulled it into left center and it got out. The guy’s hot right now. ”

St. Louis manager Mike Shildt is glad to see Arenado ripping the ball like he has been

“He’s done great. Man, what a pretty stroke,” Shildt said. “The guy is a good player. He’s in a good place. We just let him play his game.”

St. Louis went ahead 4-0 in the second on a two-out bloop single against the shift to shallow left by Edman, scoring Harrison Bader and Edmundo Sosa, who drove in a run in the third on a two-out double. It was the first RBI of the season for Sosa, who is playing in place of regular starter Paul DeJong, who is on the Injured List.

“You’re in a shift there,” Pittsburgh manager Derek Shelton said. “It would have been a great over the shoulder catch. With his angle, (shortstop Kevin) Newman just couldn’t get that. They hit the ball softly and it landed in no man’s land

Pittsburgh scored twice in the fifth on a fielder’s choice and single by Erik Gonzalez, cutting the St. Louis lead to 5-2.

“Coming off a little three-game losing streak, we had to win tonight,” Gant said. “I did the best I could for team and put the team in a position to win a we got the ‘W.’ ”

Alex Reyes pitched the ninth to record his 12th save in 12 chances.

Brubaker (3-3), who had been charged with two earned runs or fewer in six of his first seven starts, gave up five runs and eight hits in 5 2/3 innings.

Pittsburgh’s leadoff batter Adam Frazier singled in the third. He has a National League-leading 52 hits, which also ranks third in the majors.

Pirates C Michael Perez got the start Tuesday and went 0 for 4. In seven games played in May, he is hitless in 23 at-bats and his average fell to .093. His last hit came April 24 against Minnesota. “It’s a challenge for backup catchers,” Shelton said. “It happens with guys who aren’t everyday players.”

Pirates: Claimed INF Ildemaro Vargas off waivers from the Cubs and designated Troy Stokes, Jr. for assignment. … the Pirates traded RHP Sean Poppen to the Tampa Bay Rays, five days after the team designated him for assignment, for cash considerations.

Ex-Pirate Rennie Stennett died Tuesday at the age of 72. He debuted with Pittsburgh on July 10, 1971, and was a member of the Pirates’ World Series-winning teams in 1971 and 1979. In nine seasons with the Pirates, Stennett hit .278 with 38 home runs.

Pirates: C Jacob Stallings (left quad bruise) sat out but is expected back soon. He had to leave in the seventh inning of Sunday’s game against San Francisco when he was hit with a foul ball off the bat of the Buster Posey. … RHP Chad Kuhl is expected to start a rehab assignment Wednesday with Triple-A Indianapolis against the St. Paul (Minn.) Saints. He is scheduled to throw up to 45 pitches. He missed the 2019 season after Tommy John surgery.

Cardinals: LF Tyler O’Neill (left middle finger fracture) has been placed on the 10-day Injured List, retroactive to May 17. O’Neill is appearing on the IL for the second time this season. O’Neill also was sidelined April 11-22 with a right groin strain. He is batting .250 this season with eight home runs (including three in the last six games). … President of Baseball Operations John Mozeliak said reliever Jordan Hicks will refrain from baseball-related activities for at least one month after he received an injection in his right elbow last week. … Mozeliak also said RHP Miles Mikolas (right shoulder soreness) and RHO Carlos Martínez (right ankle sprain) might be back in the rotation for the Chicago Cubs this weekend in a series that begins Friday and starts a stretch of 17 consecutive days without an off-day for St. Louis.