Bader back in swing, slam in 10th carries Cards past Rockies 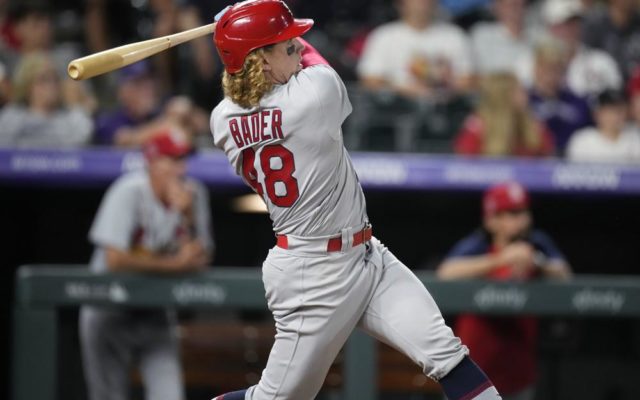 Pinch-hitter José Rondón lined a tying single with two outs in the ninth for the Cardinals, and Yadier Molina hit a go-ahead single in the 10th.

Elías Díaz homered in his fourth consecutive game for the Rockies, whose four-game winning streak was snapped. “It was a very gritty win,” Cardinals manager Mike Shildt said, noting the Cardinals were down to their final strike in the ninth when Rondón came through.

“You know, grit is an amazing attribute in individuals and in teams,” Shildt added. “It’s something this organization has had in its players and in the people that get the blessing to coach and manage them. It’s just, ‘Fight your tail off.’ That’s what we did tonight.” That scrappy, determined approach is part of the Cardinals’ mindset, Rondón said.

“Even though we fall behind with two strikes, we’re still an offense that can put the ball in play and get the job done,” he said through an interpreter. “It felt really good to contribute to the team (in that situation) and it’s something I’m never going to forget.”

Molina, who hit a two-run homer in the second inning, had an RBI single with two strikes and two outs in the 10th off Yency Almonte (2-1) that scored the automatic runner.

Tommy Edman followed with another run-scoring single and a walk set up Bader. Activated from the injured list Thursday after missing more than a month with a rib injury, Bader connected for his fifth home run of the season.

Díaz, who also doubled, became the first catcher in Rockies’ history to homer in four consecutive games. His homer streak is the longest by a Rockies player since David Dahl homered in five consecutive games from Sept. 24-28, 2018.

Arenado, the former Rockies star traded to St. Louis in the offseason, was greeted with a standing ovation from the sellout crowd before his initial at-bat. He doffed his helmet to the crowd in acknowledgement. He had a single in four at-bats and was intentionally walked in the 10th.

Trailing by a run going into the top of the ninth, the Cardinals rallied to tie it at 3-all. Justin Lawrence walked Tommy Edman and Bader, and Rondón delivered. Lawrence, a rookie, was on the mound because the team’s closer, Daniel Bard, had been used frequently in recent days.

“He had two good sliders to get ahead and then hung the 0-2,” Rockies manager Bud Black said. “It’s a learning experience for a young pitcher. He has 11 major league innings, but he has a good arm for sure. He’ll learn from that and be better off for it down the road.”

Ryan McMahon and C.J. Cron had successive doubles off Johan Oviedo in the sixth that put Colorado ahead 3-2.

The Rockies drew a sellout crowd of 47,224 to Coors Field. It’s the first full-capacity sellout since state and local authorities, in conjunction with MLB and the club, lifted all pandemic-related attendance restrictions for Monday’s “re-Opening day” game against the Pittsburgh Pirates.

Rockies: LHP Austin Gomber, sidelined since June 20 because of left forearm tightness, came out of Thursday’s bullpen session in good shape and is expected to throw another one on Saturday or Sunday. Black said if all goes well, Gomber could be reinstated from the 10-day injured list soon after the All-Star break.

Cardinals: LHP Wade LeBlanc (0-1, 5.60 ERA) is set to make a second straight start after beginning his stay in St. Louis with four relief appearances. He was signed by the Cardinals on June 17, a day after his release by the Texas Rangers.

Rockies: LHP Kyle Freeland (1-2, 6.54 ERA) is coming off his first win of the season, a five-inning stint that was cut short due to leg cramps suffered while running the bases. Freeland had to come out of his last start after five innings because of leg cramps. He had no further trouble in the aftermath, allowing team medical staff to clear him to take his next turn as scheduled.