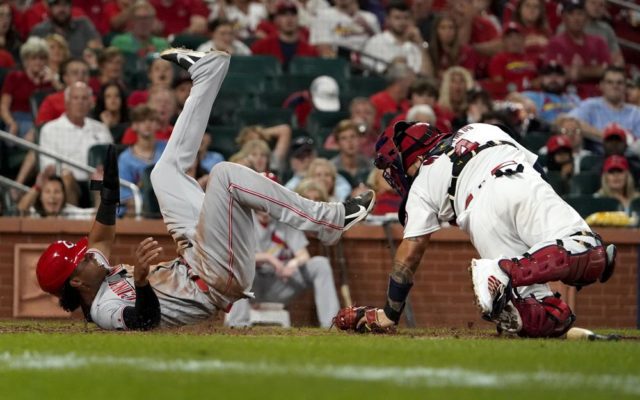 ST. LOUIS (AP) — Jose Barrero made the most of an unexpected start by doubling in the tiebreaking run in the ninth inning, leading the Cincinnati Reds over the St. Louis Cardinals 4-2 Friday night.

The 23-year-old Barrero had two hits after he was recalled from Triple-A Louisville earlier in the day to fill in for infielder Kyle Farmer, who was placed on the paternity list. Barrero was hitting .167 over 14 big league games prior to Friday.

Both teams are vying for the second wild-card spot. The Reds entered trailing the Padres by a game for the second spot, and the Cardinals began the night three games behind San Diego.

Barrero said he didn’t feel any pressure stepping into the game.

T.J. McFarland (3-1) started the ninth giving up an infield single to Eugenio Suarez. Following a force out at second, Barrero hit a ball to deep center that gave the Reds the lead. Barrero scored on Delino DeShields’ fielder’s choice grounder.

The Reds struck first in the second inning. With one out, Suarez smoked a 2-2 cutter from starter Jon Lester for his 26th home run and a 1-0 lead.

Michael Lorenzen (1-2) pitched the eighth for his first victory of the season, and Mychal Givens pitched the ninth for his seventh save.

“We just have to keep playing and the goal is to be saying that for the next several weeks,” Reds manager David Bell said. “This was a big win, a big game.”

Joey Votto homered for the second straight game when he led off the fourth with a drive just over the center-field wall and the outreached glove of Harrison Bader for his 30th homer.

Votto turned 38 years old, while Cardinals first baseman Paul Goldschmidt celebrated his 34th. It was the second game since at least 1901 in which both starting first basemen had birthdays, joining a June 25, 1997 game shared by birthday boys Carlos Delgado and Mike Stanley.

The Cardinals came back to tie it in the fourth. Following Nolan Arenado’s walk, Yadier Molina drilled a 2-1 fastball into the left-field seats. It was Molina’s second home run along with four RBIs in his last two starts.

That was the only damage Reds starter Tyler Mahle allowed. Mahle pitched six innings, giving up two runs and four hits. He walked two while striking out six.

“Need probably just more quality at-bats. It’s hard to sit here and talk about what the team needs to do,” Arenado said. “Individually I’m not doing a very good job so. … I don’t know. I really don’t know. I think just be better and I don’t know quite the answer. It’s hard for me to speak on those things when I’m not really doing my job.”

Lester threw seven innings, allowing just the two home runs. Lester hadn’t thrown seven complete innings since July 19th against Miami when he was a member of the Washington Nationals.

MOVING UP THE REDS LADDER

Votto’s home run was the 325th of his career and moved him into second place all-time among Cincinnati home run leaders, passing Frank Robinson. He now only trails Johnny Bench, who had 389 career home runs.

Cardinals: SS Edmundo Sosa (sore left wrist) was not in the lineup for the second consecutive day. Sosa jammed his wrist trying to field Trea Turner’s grounder that resulted in an infield single in Wednesday’s 5-4 victory over the Los Angeles Dodgers.

RHP Luis Castillo (7-15, 4.20 ERA) pitches for Cincinnati and RHP Miles Mikolas (0-2 5.06 ERA) goes for St. Louis as the Reds and Cardinals continue their three-games series Saturday. Castillo has lost his last three decisions, while Mikolas is making just his sixth start of the season after spending time on the injured list with right forearm tightness.