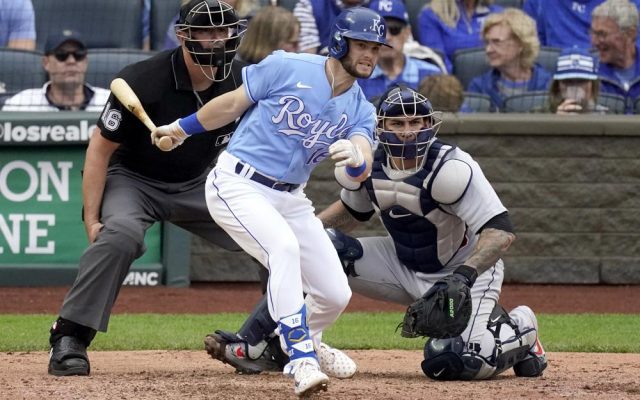 Kansas City Royals' Andrew Benintendi hits an RBI single during the fifth inning of a baseball game against the Detroit Tigers Saturday, May 22, 2021, in Kansas City, Mo. (AP Photo/Charlie Riedel)

The Tigers trailed 7-3 going into the ninth before Robbie Grossman hit a two-run homer.

Detroit then loaded the bases with one out. Staumont struck out Jonathan Schoop and Willi Castro to end it, finishing with a 100 mph fastball.

“We had our opportunities,” Detroit manager A.J. Hinch said. “We had plenty of traffic on our own side to create a few more runs, but unfortunately, we didn’t.”

The Tigers went 3 for 15 with runners in scoring position. Scott Barlow struck out Miguel Cabrera with the bases loaded to end the seventh with Detroit down 6-3.

“I liked having Scott out there in that point,” Kansas City manager Mike Matheny said. “We’ve seen them come through before. We wanted to move on from last night and Scott made some big pitches.”

Cabrera punished the Royals with a grand slam in the opening game of the series.

“I’m pretty set in my approach,” Benintendi said. “I’m just taking what they give me and not trying to do too much.”

“That was a battle for Brady,” Matheny said. “It was very impressive to see a young pitcher not have his command, but next thing you know he was finding ways to get outs.”

Akil Baddoo had the first three-hit game of his career, including a two-run single in the Detroit second. Harold Castro added an RBI single in the fifth.

The Royals took a 4-2 lead in the fourth on an RBI double by Michael A. Taylor and a sacrifice fly by Nicky Lopez.

Royals: RHP Jesse Hahn (right shoulder impingement) was transferred to the 60-day injured list. Hahn was placed on the 10-day IL. … 3B Hunter Dozier was sent to Triple-A Omaha on a rehab assignment following a stint on the seven-day IL with a concussion.

Royals: Kansas City acquired RHP Domingo Tapia from Seattle for cash and optioned him to Triple A Omaha.