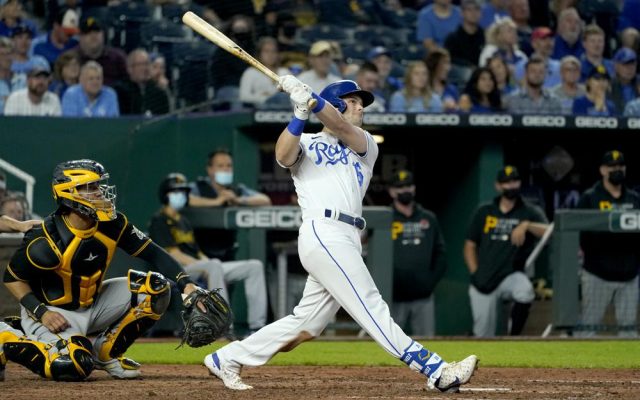 KANSAS CITY, Mo. (AP) — Andrew Benintendi hit a grand slam and drove in five runs, leading the Kansas City Royals to a 10-5 victory over the Pittsburgh Pirates on Tuesday night.

Wil Crowe (0-4) took the loss. He gave up eight runs and eight hits in four-plus innings.

“What a show,” Royals manager Mike Matheny said after his team’s offensive outburst. “The top-of-the-order hitters gave the opportunities for Beni and what a sweet swing that was.

“It was great to see a lot of different guys make things happen.”

Adam Frazier, who led the National League with 40 hits in May, doubled twice for Pittsburgh.

Benintendi drove in Kansas City’s first run with a single in the first inning.

The Pirates scored three times in the third. Singer loaded the bases with no outs on an infield single, a walk and a hit batter. An RBI single by Bryan Reynolds and sacrifice flies by Gregory Polanco and Ben Gamel knocked in the next two runs.

Kevin Newman singled and raced home when Michael Perez sent one to the wall in right-center for a double to give the Pirates a 4-1 lead in the fourth.

Singer was not thrilled with his outing, but he wasn’t worried about his club’s ability to come back.

“I struggled with a little bit of my control there,” he said. “It wasn’t terrible, but up in the zone a lot. But the whole lineup was incredible. It was really good to see those guys do that.”

Perez drew the Royals to 4-3 with his 11th home run in the bottom half. Carlos Santana led off with a single. With one out, Perez launched a two-run drive into the Pirates’ bullpen in left.

“I was just looking for a pitch to drive to the outfield,” Benintendi said.

Pirates manager Derek Shelton was second-guessing the decision to leave Crowe in to face Benintendi.

“We didn’t execute a pitch,” Shelton said. “We tried to go up and away with a fastball and he threw a fastball down and in. In retrospect, we probably should have made a move.”

The Pirates scored in the sixth on Frazier’s bloop double with two outs, but they left the bases loaded.

Perez’s second home run came with one out in the seventh.

Taylor’s sacrifice fly in the eighth provided the final run.

Pirates: Shelton said 3B Ke’Bryan Hayes (left wrist strain) is likely to return to the roster Thursday against Miami. Hayes has been out of the lineup since April 4.

Royals: SS Adalberto Mondesi was not in the starting lineup after coming out of Monday’s game with a “tweaked” left hamstring. Matheny said he wouldn’t rule out an appearance by Mondesi in Tuesday’s game, but he preferred to wait until Thursday with Wednesday’s off day.

Following an off day on Wednesday, Pirates LHP Tyler Anderson (3-5, 4.63 ERA) will take the ball against the Miami Marlins. He had a bounce-back performance against the Cubs, allowing two earned runs in five innings.

The Royals are also off Wednesday. LHP Kris Bubic (1-0, 1.52 ERA) will face the Twins for the second straight start, this time in Kansas City on Thursday. He allowed one run and four hits over six innings in Minnesota.