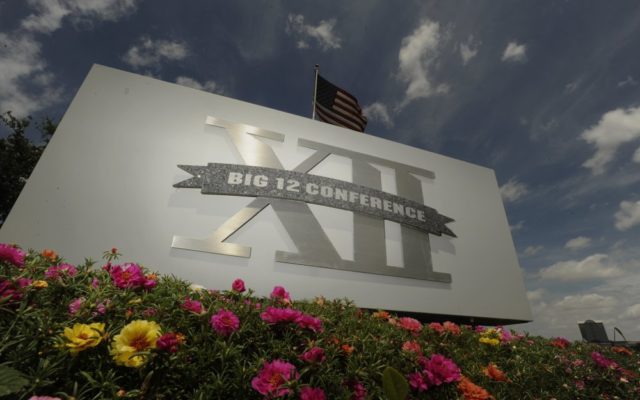 FILE - In this June 14, 2010, file photo, a Big 12 sign is seen outside the conference headquarters in Irving, Texas. The coronavirus pandemic has shuttered sports at all levels, but all Big 12 schools expect their campuses to be open in the fall, lending hope to the possibility that football can start on time. (AP Photo/Cody Duty, File)

(AP)-Big 12 schools agreed Monday night to play one nonconference football game this year to go along with their nine league contests as plans for the pandemic-altered 2020 season continued to fall into place.

The Big 12’s university presidents signed off on a 10-game schedule, adjusted to deal with potential disruptions from COVID-19 that lets schools play one nonconference opponent at home. A specific start date for conference play was not determined. The conference said in a news release it will likely begin mid-to-late September and the expectation is nonconference games will be completed before league play starts.

The Big 12 championship game at AT&T Stadium in Arlington, Texas, is scheduled for Dec. 5, but could be moved back to Dec. 12 or 19, the league announced. Dec. 19 could pose a scheduling conflict with high school football championships at the Dallas Cowboys’ stadium and force the Big 12 to relocate.

The 10-team Big 12 already plays a nine-game, round-robin conference schedule. Unlike other Power Five conference that have switched to either exclusively (Big Ten, Pac-12 and SEC) or mostly (ACC) league games, the Big 12 could not add more conference games without teams playing each other more than once.

As conferences take steps toward a football season that seems to be in precarious shape because of the pandemic, the NCAA is expected to weigh in Tuesday on fall sports other than major-college football.