Bobcats Have Final Answer In 2021 8-Man Show Me Bowl 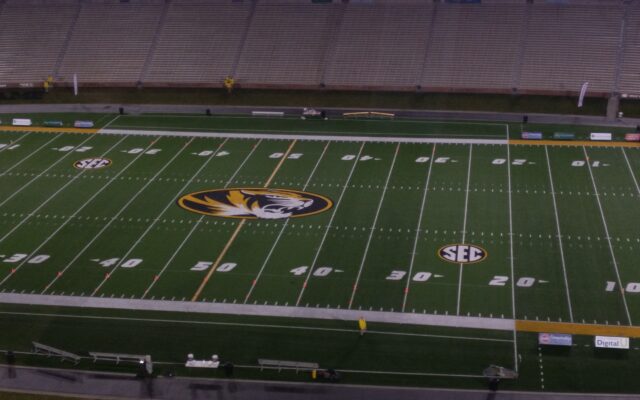 The only thing disappointing thing about the MSHSAA 2021 8-man Football Show Me Bowl was the fact that one team had to experience the outcome of  a loss. In a game that lived up to its inflated billing, Drexel used an interception with just 22 seconds left in regulation to beat Worth County 48-42 in an undefeated matchup at Faurot Field in Columbia Thursday night.

Both the Tigers and Bobcats threw out challenges and answers to one another in the first 47 minutes and 38 seconds of the game, but an interception by Drexel’s Cory Cumpton at the Bobcat 2- yard- line was the final answer of the game and gave Drexel their first 8-man football title.

Worth County scored on their opening possession. Braxton Hightshoe scored a rushing touchdown on the third offensive play of the game, but Drexel countered with a drive of their own. Both teams then got a defensive stop and went back to scoring again. Worth County led 14-6 on Aydan Gladstone’s 27-yard touchdown pass to Dylan McIntyre early in the second period. Drexel scored just eight seconds later on a Jacob Coffey to Corey Cumpton touchdown pass. The two teams answered one another again, and the game was tied 20-20 going into the final minute of the first half.

Drexel challenged to take some control in the game after an interception near midfield. That would lead to a Jacob Coffey 5-yard run and 26-20 lead with just 1:02 to go in a half. Levi Cassavaugh then answered for the Tigers with a 68 yard kickoff return. Worth County got the two-point conversion and led 28-26 at halftime.

That’s when Aydan Gladstone and Dylan McIntyre connected again. Their 29-yard pass play made it 42-42. The two-point conversion failed. Drexel scored two minutes later to lead 48-42. Worth County was then stopped in their own territory, but Braxton Highshoe’s interception forced by a quarterback pressure allowed Worth County to get one more possession. Worth County completed a 3rd-and 28 to get a first down, but a pass again intended for McIntyre near the pylon at the Drexel 2 resulted in a Cory Cumpton interception and secured the Drexel win.

Worth County had two touchdown passes and a TD reception from Aydan Gladstone.  He also scored a rushing touchdown  Hightshoe also had a TD run and reception in addition to the interception.  Dylan McIntyre caught two TD passes.

Jacob Coffey of Drexel scored 4 touchdowns and threw two more to Cory Cumpton.
Worth County ends their season 13-1.  Drexel is the MSHSAA champion with a record of 13-0.
Events Calendar
Loading view.