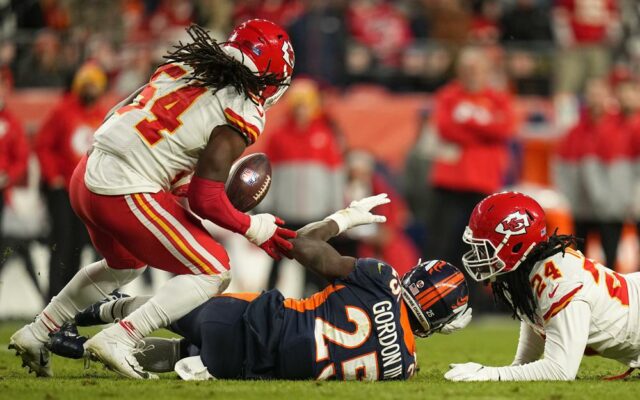 Denver Broncos running back Melvin Gordon III (25) loses a fumble after being hit by Kansas City Chiefs linebacker Melvin Ingram, right, before outside linebacker Nick Bolton (54) returned it for a touchdown during the second half of an NFL football game Saturday, Jan. 8, 2022, in Denver. (AP Photo/Jack Dempsey)

DENVER (AP) — Nearly stumbling heading into the playoffs, Nick Bolton and the Kansas City Chiefs gathered themselves just in time to thunder into the postseason with an AFC-best 12 wins.

They’ll learn Sunday if that’s enough to get them a first-round bye.

“We’re ready to go wherever and against whomever,” Patrick Mahomes said after the Chiefs rallied for a 28-24 win Saturday over the Denver Broncos, a victory powered by Bolton’s 86-yard fumble return midway through the fourth quarter.

To secure the pole position in the AFC playoffs, the Chiefs (12-5) need Houston to upset the Tennessee on Sunday. If not, Kansas City hosts a wild-card game next weekend in its quest to reach a third consecutive Super Bowl.

The Broncos were ahead 21-20 and driving for another score when Melvin Ingram III blitzed, speeding past tight end Noah Fant untouched and blowing up the play just as Drew Lock handed the ball to Melvin Gordon on second-and-2 from the 9.

Bolton, a rookie linebacker who checks in at 237 pounds, scooped up the loose ball and rumbled down the Chiefs’ euphoric sideline, nearly falling down at midfield before regaining his balance and outracing Lock, whom he played with at Missouri, to the end zone.

“I was hoping that he wouldn’t stumble,” Chiefs coach Andy Reid said after his 250th NFL coaching victory, including playoffs. “Those guys don’t get much of a chance to run that far that fast very often and he ran like a stallion. He took off and looked like a running back there.”

Like many of the other victories in the Chiefs’ 13-game winning streak against Denver, this one was no cakewalk. The Broncos (7-10) led for much of the afternoon despite having nothing to play for but pride.

“My main emotion is really proud of our payers,” Broncos coach Vic Fangio said. “That’s a team that may win it all. They’ve obviously won a lot of games the last four or five yeas since Mahomes has taken over. We had a chance to win that game. But not winning it is the bottom line and we didn’t get it done.”

“I love the way our defense buckled down,” Reid said. “All in all, a good win and an important win for the Kansas City Chiefs and we’ll see what we have by tomorrow night, who we’re playing. We sure look forward to bringing back a playoff game back to Arrowhead in front of our fans.”

Wide receiver Tyreek Hill could surely use the week off that goes to the top seed in each conference. He injured a heel in pregame warmups and was held to one catch for 2 yards. With Hill hurting, Mecole Hardman stepped up with eight catches for 103 yards.

“No one is Tyreek. He’s a special player that has never been seen in this league,” Mahomes said. “But Mecole is pretty close. … He was prepared for this moment.”

After Mahomes scored a 2-point conversion following Bolton’s touchdown to give the Chiefs a seven-point lead, the Broncos quickly drove downfield again but settled for Brandon McManus’ chip shot field goal rather than going for it on fourth-and-9 from the 13.

The crowd booed the decision, but Fangio explained that even though the field goal left them needing a touchdown, at least it kept their hopes alive.

All they had to do was stop Mahomes, something they’d managed to do twice in Kansas City’s six drives excluding the final possession of the first half when the Chiefs got the ball at their 15 with 23 seconds remaining.

The Chiefs, however, chewed up the final 4:37 and lined up in victory formation after the 2-minute warning as the crowd of 61,441 — there were nearly 15,000 empty seats — streamed for the exits, a fifth straight losing season in the books and the Broncos’ playoff drought now stretched to six years.

Lock completed just 4 of 10 passes for 27 yards in the first half but the Broncos took a 14-10 halftime lead thanks to Lock’s touchdown scrambles of 5 and 23 yards, which made him the first Broncos quarterback with two touchdown runs in a game since Tim Tebow in 2011.

“Definitely not designed runs,” said Lock, who lost all three of his starts after Teddy Bridgewater sustained a concussion against Cincinnati on Dec. 19.

The Chiefs were 11-point favorites according to FanDuel SportsBook marking just the third time in the last 42 years that the Broncos were double-digit home underdogs.

Fangio got emotional in his postgame news conference but said he hadn’t heard if he’d be back for the fourth year on his contract.

“You saw it out there tonight, a bunch of fighters and competitors” Fangio said after the Broncos’ fourth straight loss dropped his record to 19-30. “And I think you saw it all year. And that’s what these guys are. I’m proud to be associated with them. I’m not proud of our record. I know it’s not good enough. I get it. But I’m proud to be associated with our players.”

Chiefs RB Darrel Williams (toe) left early in the fourth quarter. Broncos RT Bobby Massie was added to the injury report Saturday with a concussion and was ruled out.

After this close call, the Chiefs get to cheer on the Texans.

The Broncos head into an offseason sure to include big changes.