Browns let chance for season-opening win slip away in KC 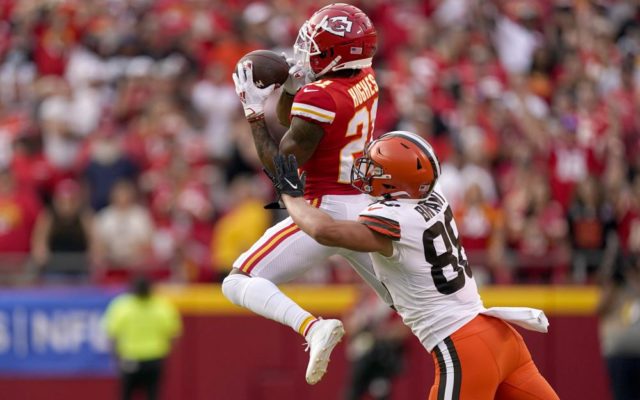 KANSAS CITY, Mo. (AP) — It might have been the magnitude of the moment — the Browns, after more than a decade of Week 1 woes, finally appeared to be headed toward a winning start in a season that begins with Super Bowl aspirations.

Whatever the case, Cleveland cracked under the pressure in the second half in Kansas City on Sunday, fumbling away — quite literally — its chances of beating the two-time defending AFC champs. The Chiefs capitalized on the miscues to rally from a 22-10 hole and escape with a 33-29 victory in a rematch of their divisional-round playoff game.

“It’s very frustrating. But that’s what happens in this league,” Browns quarterback Baker Mayfield said. “You have to do the little things and play a full four quarters. I think there are 16 more of these but this one stings and it should.”

Mayfield threw for 321 yards, most of it coming in the first half, when the Browns could do no wrong against a porous Chiefs defense. He led three TD drives of at least 75 yards, two capped by Nick Chubb and the other by Jarvis Landry, and he did a masterful job of keeping the ball out of the hands of the potent Kansas City offense.

Chubb and former Chiefs running back Kareem Hunt did their part, too. They pounded away against the Chiefs defensive front, dictating the tempo of the game and piling up an astounding 318 yards in the first half alone.

And apparently, that means the Browns are incapable of winning.

They’ve won just once on opening weekend since returning to Cleveland in 1999, losing an NFL-record 17 straight games to start the season. Their last opening win on the road came in 1994, a year before Mayfield was born. And all those markers of ineptitude were extended Sunday following a comprehensive second-half collapse.

That began after the Chiefs churned up nearly half the third quarter and pulled within 22-17 on Travis Kelce’s touchdown reception. Chubb fumbled the ball deep in Cleveland’s territory, and the Chiefs melted the rest of the quarter away before Harrison Butker made it 22-20 heading into the fourth.

Then came perhaps their biggest gaffe.

The Browns had extended their lead to 29-20 and were threatening to regain the momentum when Mahomes, rolling to his right, chucked the ball deep downfield.

Tyreek Hill somehow adjusted to the fluttering throw and pulled it down near the 50-yard line, then turned around and pranced the rest of the way for a 75-yard touchdown reception.

Suddenly, the full crowd inside Arrowhead Stadium for the first time in nearly two years was booming.

Perhaps it flummoxed Browns punter Jamie Gillan, who inexplicably dropped the snap when they were forced to punt on their next possession. The Chiefs took over at the 15-yard line and Kelce’s second TD catch gave them their first lead.

“You knew how the game was going to go,” Chiefs coach Andy Reid said. “They were measuring us against them. We were kind of doing the same. We knew they were a good football team. Our guys were pressed to perform out there.”

The final mistake? That came when Mayfield, trying to rally the Browns in the closing minutes, threw a weak pass toward the sideline with just over a minute left. Mike Hughes stepped in front of it for an interception that clinched the game.