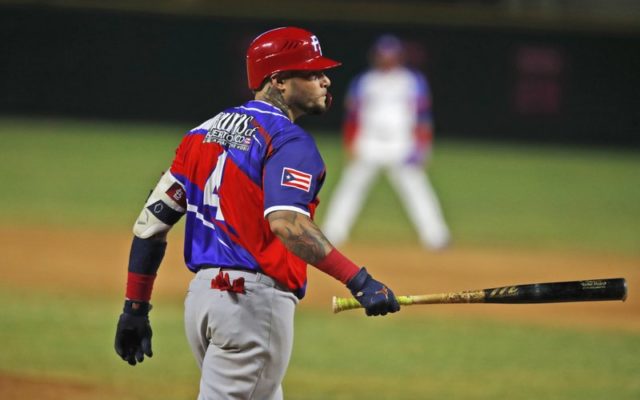 Puerto Rico's Yadier Molina walk to first base after hit by pitch during the first inning of the team's' Caribbean Series baseball final game against the Dominican Republic at Teodoro Mariscal stadium in Mazatlan, Mexico, Saturday, Feb. 6, 2021. (AP Photo/Moises Castillo)

ST. LOUIS (AP) — The St. Louis Cardinals are bringing back catcher Yadier Molina for an 18th season, agreeing Monday to a $9 million, one-year deal with the nine-time Gold Glove winner.

“We are excited to announce that we have agreed to terms with Yadier Molina on a new contract!” the team said in a statement. “We will have more details (Tuesday) on Yadi continuing his Cardinals legacy.”

The nine-time All-Star and two-time World Series champion has appeared in 2,025 games for St. Louis since breaking into the majors in 2004, third on the franchise list behind Hall of Famers Stan Musial (3,026) and Lou Brock (2,289).

Molina is a career .281 hitter with 160 home runs, but he’s best known for his defense. He trails only Ivan Rodriguez (13) and Johnny Bench (10) for most Gold Gloves by a catcher.

In the 10 years since the Platinum Glove Awards were introduced honoring the best fielder regardless of position in each league, Molina and Arenado are tied for the most with four each.