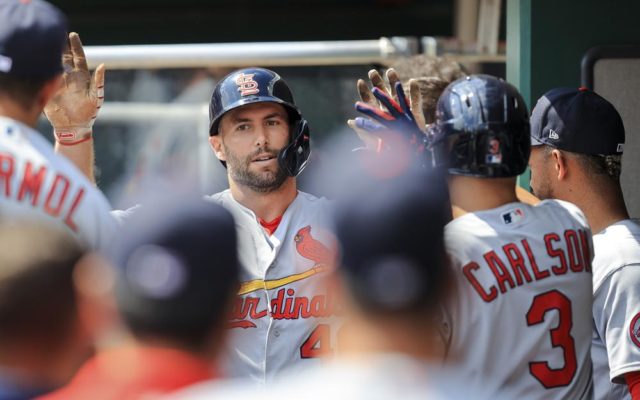 St. Louis Cardinals' Paul Goldschmidt celebrates with teammates after hitting a two-run home run during the fourth inning of the first game of a doubleheader baseball game against the Cincinnati Reds in Cincinnati, Wednesday, Sept. 1, 2021. (AP Photo/Aaron Doster)

CINCINNATI (AP) — Nick Castellanos drove in six runs with a grand slam and a two-run shot in the first two innings, and the Cincinnati Reds beat the St. Louis Cardinals 12-2 Wednesday night to split a doubleheader.

Cincinnati rocked starter J.A. Happ (8-7) and regained a half-game lead over San Diego for second in the NL wild-card race. St. Louis slipped into a tie for fourth with Philadelphia.

“It was great that Nick set the tone,” Cincinnati manager David Bell said. “Both were big. They were good at-bats to get us into that position. It got us off to a good start. Sometimes, it’s more important than others. This time, it was really important”

Paul Goldschmidt gave St. Louis the lead with his second homer of the game as the Cardinals won the opener, 5-4. The Cardinals trailed 4-3 before Goldschmidt drove his third homer of the series into the last section of seats in deep right-center field with Tommy Edman on first base in the fourth.

“If we were playing European football we would have won in the aggregate,” Reds first baseman Joey Votto said. “If we’d have lost this one it would have been a tough day. It’s good that we came back and won the game.”

Castellanos’ grand slam, smacked with a bat missing a chunk at the top, was the fourth of five straight Cincinnati hits to start the second against Happ, knocking him out of the game.

The game was delayed after the grand slam while umpires discussed and reviewed with New York rules about bats. The umpires determined the chipped bat didn’t play a role in the ball leaving the park, said long-time umpire Randy Marsh, now an umpire observer. Castellanos handed the bat to a fan behind the Reds’ dugout.

“My view is that it was my second home run and I drove in six RBI,” Castellanos said. “Then, all of a sudden, there was an issue. There wasn’t an issue when (Jon) Lester carved me up.”

Haap went into the game 3-0 in five starts since being acquired by St. Louis on July 30. The Reds piled up eight hits and seven runs with two walks and no strikeouts against the left-hander. They sent 12 batters to the plate in the second.

Those were the only hits and runs allowed in five innings by Gray (7-6), who has won each of his last three starts and is 5-0 over his last seven. He struck out three with no walks.

The Cardinals in the opener bashed three homers among their 12 hits off Wade Miley (11-5), both season highs against the left-hander. Miley gave up five runs with one walk and two strikeouts in four innings for his first loss in 16 starts since coming off the injured list on May 30.

Reliever Génesis Cabrera (3-5) pitched two scoreless innings for St. Louis. Giovanny Gallegos pitched the seventh for his fourth save and second in the Cardinals’ last two games, both against Cincinnati.

The Reds scored three runs in the third inning, equaling the total from their previous three games combined. Miley drove in two with an opposite-field double to left.

Goldschmidt, the game’s second batter, launched a changeup off the ribbon message board atop the center field batter’s eye. He has 24 homers this season. He hit a two-run shot in the first inning of Monday’s 3-1 win.

St. Louis right-hander Miles Mikolas lasted only three innings in his third start since coming off the injured list Aug. 20. He allowed five hits and four runs with one walk and three strikeouts.

Cardinals second baseman Edman went sprawling over the rolled-up tarp and was briefly tangled in protective netting down the right field line while catching Tyler Stephenson’s foul popup to end the second.

Before the doubleheader, the Cardinals recalled C Ali Sánchez and promoted RHP Brandon Dickson as rosters expanded to 28 for September. Dickson’s appearance in the nightcap was his first for St. Louis in more than nine seasons, the longest span between appearances for the Cardinals by any player in franchise history.

Cardinals: RHP Ryan Helsley (right elbow stress reaction) was transferred to the 60-day injured list. He has been out since Aug. 17. RHP Junior Fernández left the game in the second inning with an undisclosed injury.

Reds: OF Jesse Winker, on the 10-day injured list since Aug. 16 with an intercostal strain, started swinging a bat on Tuesday, manager David Bell said.

Cardinals: Begin a three-game series at the NL Central-leading Brewers on Friday night with RHP Adam Wainwright (13-7, 2.95 ERA) on the mound. St. Louis has won each of Wainwright’s last eight starts at Milwaukee since a 4-3 loss on July 18, 2012.