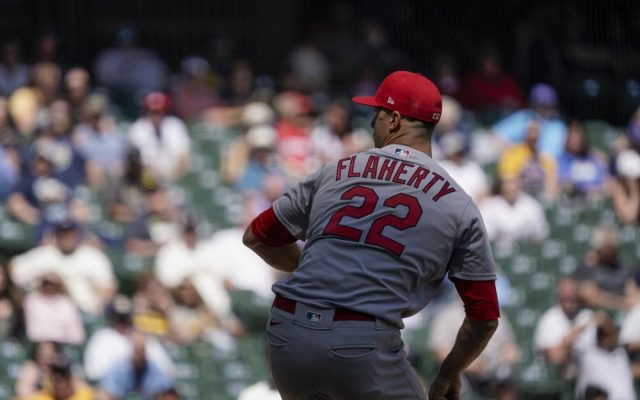 These days, Flaherty is finding a way to win just about anywhere.

Flaherty became the major leagues’ first seven-game winner this year with a 2-0 victory over Milwaukee on Thursday as the Brewers’ Corbin Burnes extended his streak to 58 consecutive strikeouts before his first walk.

“You’ve got to find a way to push that to the side and focus on staying present,” Flaherty said. “All those things happened in the past.”

Flaherty (7-0) allowed four hits, struck out six and walked two to help the Cardinals win a three-game series that featured dominant starting pitching. Nolan Arenado’s first-inning RBI single that put St. Louis ahead for good marked the only time in this series that either team scored before the sixth inning.

Heading into Thursday’s game, Flaherty had enjoyed the most run support of any big league pitcher.

“It’s two really, really good pitchers in this league going at each other,” Cardinals manager Mike Shildt said. “Jack’s not going to back down from anybody. He embraces the competition and went out and did his part and made some big pitches.”

In his first appearance since April 26, Burnes (2-3) struck out nine among his first 14 outs before walking Tommy Edman with two outs in the fifth.

After starting Edman with a curveball for a called strike, Burnes threw a changeup and three straight cutters, the last a 3-1 pitch that sailed high.

“To go that long without one is pretty special,” Burnes said. “Now I guess I’ve got to start over.”

According to the Elias Sports Bureau, Burnes’ 58 strikeouts without a walk were the most by a major league pitcher within the same season since at least 1893, when the mound moved to its current distance from the plate of 60 feet, 6 inches.

Gerrit Cole of the New York Yankees extended his active streak to 56 strikeouts without a walk on Wednesday at Tampa Bay. Cole has walked three this season.

Burnes allowed one run and five hits in five innings with nine strikeouts as he returned from the injured list after a positive test for coronavirus, which he said left him asymptomatic. He opted against getting vaccinated for what he said were personal reasons.

Although Burnes has a 1.57 ERA, the Brewers have gone 2-4 in his six starts — scoring a total of one run in the four losses.

Alex Reyes remained perfect in 11 save chances by striking out Tyrone Taylor to strand two runners. The Brewers went 0 for 10 with runners in scoring position.

“We’re in a rut with it,” Brewers manager Craig Counsell said. “We’re just not getting it done in those spots right now.”

Counsell was ejected in the third inning after arguing a ruling with Dylan Carlson at the plate.

Carlson hadn’t run on a grounder up the first-base line because he believed the ball was foul. First-base umpire Jim Reynolds initially ruled the ball fair, but the umpiring crew conferred and the call was changed to a foul ball.

“Jim got the call right in the end, but the process they used to get the call right didn’t make any sense to me,” Counsell said. “They weren’t going to change the call if the other team’s manager didn’t walk out on the field. I don’t understand that.”

Cardinals: Shildt said MRI results on Paul DeJong are “likely to create a pause” before the shortstop’s return, but added that it’s probably “not anything overly long-term.” DeJong left Wednesday’s game with left side tightness.

Brewers: OF Christian Yelich will begin a rehabilitation assignment with the Brewers’ Triple-A affiliate in Nashville, Tennessee, on Friday as the 2018 NL MVP recovers from a strained lower back that has caused him to play just one game since April 11. … Utilityman Daniel Robertson (concussion) is beginning a rehab assignment in Nashville on Thursday. … The Brewers activated C Omar Narváez (hamstring) and RHP Josh Lindblom (knee) from the injured list.

Cardinals: Begin a three-game series at San Diego on Friday. The scheduled starting pitchers are Johan Oviedo (0-1, 4.61) for the Cardinals and Joe Musgrove (2-4, 3.00) for the Padres.