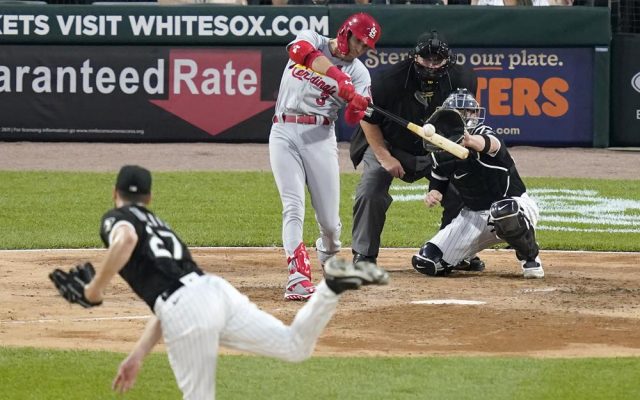 CHICAGO (AP) — Sharing the mound with an old friend, Lucas Giolito soaked it all in. And he won, too.

Earlier in his career, during his bumpy rise from top prospect to major league ace, Giolito said he might have mishandled a hyped matchup like the one with Flaherty.

“I feel like now I’m able to enjoy these kinds of moments and these kinds of experiences rather than stressing about them,” Giolito said. “When it comes time to stepping between the lines, I’m going to do my job and just stay on my path, have my focus at the glove, execute my pitches and kind of drown everything else out.”

The Harvard-Westlake High reunion also had a little history behind the plate, with Joe West working a record 5,376th regular-season game, snapping a tie with Hall of Fame umpire Bill Klem.

West was saluted by many of his longtime friends, including country music veterans Garth Brooks, Emmylou Harris and The Oak Ridge Boys, during an experience that he described as humbling.

“It was a very nice thing,” West said.

Giolito (4-4) permitted two runs — one earned — and six hits in his second straight win, easily getting the better of a shaky Flaherty hurt by another poor defensive performance by the Cardinals.

Flaherty (8-1), leading the majors in wins, lasted just 3 2/3 innings in his shortest outing of the season. He was charged with three earned runs and six hits.

“I was just trying to keep making pitches and continuing to try to execute,” Flaherty said.

José Abreu homered and drove in four runs for Chicago, which earned its second straight win since it was swept by the Yankees over the weekend. Liam Hendriks entered with the bases loaded in the ninth and struck out the side for his 10th save.

St. Louis committed a season-high three errors in its fourth loss in five games, one night after it had two errors in the series opener. Flaherty hit two batters and threw two of the Cardinals’ three wild pitches, running its NL-high total to 30.

Giolito, Flaherty and Atlanta Braves pitcher Max Fried were teammates at Harvard-Westlake in Southern California, where their pitching coach was Ethan Katz, who was hired as White Sox pitching coach in November. Matt LaCour, who coached the trio in high school and now serves as the school’s athletic director, also attended the game.

“It’s really special,” Katz said. “I don’t know if this will ever happen again.”

“It’s a pretty cool thing,” he said before the game.

Abreu helped put it away with his 10th homer in the fourth, making it 7-2 with a two-run shot to left against Flaherty. The reigning AL MVP also had a run-scoring groundout in the first and an RBI single in the sixth.

Cardinals star Yadier Molina made his 1,955th start at catcher, passing Hall of Famer Gary Carter for fifth on the all-time list. Jason Kendall is next up at 1,990.

Cardinals: OF Harrison Bader was placed on the 10-day injured list with a right rib injury. Shildt said a CAT scan revealed a hairline fracture. First baseman/outfielder John Nogowski was recalled from Triple-A Memphis. … Barring a setback, OF Tyler O’Neill (fractured middle finger) is expected to return during the Cardinals’ current 10-game trip. O’Neill got hurt sliding into a base during a 5-3 loss at San Diego on May 16.

White Sox: OF Adam Engel (right hamstring) began a rehab assignment with Triple-A Charlotte. He was the designated hitter for the Knights’ game at Norfolk.

Cardinals right-hander John Gant (3-3, 2.04 ERA) and White Sox left-hander Carlos Rodón (5-1, 1.27 ERA) start the series finale on Wednesday. Gant is 3-1 with a 1.40 ERA over his last five appearances. Rodón is coming off a dominant performance against the Yankees, striking out a career-high 13 over six shutout innings in a no-decision on Friday.