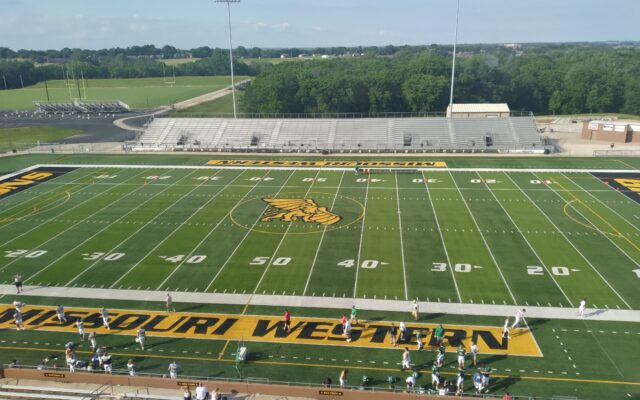 Aydan Gladstone’s keeper off play action provided the final score, and a defensive stand at the end of the game gave the Green All Star Team a 34-26 win in the Missouri Football Coaches Association All Star Football game at Spratt Stadium on the Missouri Western State University Campus Saturday evening.

Gladstone threw for an early touchdown in each half, and ran for two more as the Green All Stars rallied from a two-touchdown first half deficit. Gladstone threw the first touchdown on the Green team’s first offense play from scrimmage. Gladstone hit fellow Worth County Tiger Jackson Runde on a 70 yard pass about 2 minutes into the game. The two-point conversion, also to Runde, gave the Green an 8-0 advantage.

Both teams then traded possessions over the next 13 minutes until the Silver All Star quarterback, Peyton McFrederick of Rich Hll, hit Julio Gann of Bishop LeBlond with the first of two touchdown passes with just over 9 minutes left in the second quarter. The two point conversion tied the game, and the Silver team swung momentum to their side when they recovered a fumble from Jackson Runde after he caught a short pass off a catch and run. The first offensive play after the fumble was a 36 yard pass to Owen Hostetter of Santa Fe and gave the Silver team their first lead of the game at 14-8.

The Silver team made it 20 consecutive points 4 minutes later with the second touchdown pass to Julio Gann, and the Silver team led 20-8 with just 2:12 remaining in the 2nd quarter.

The Green team’s defensive pressure also scored a safety when the Silver team gambled with a throw from deep in their own territory with 23 seconds left in the 2nd quarter. McFrederick was stripped of the ball and it was recovered in the end zone, getting the Green All Stars within 20-18 at halftime.

The Green opened the 3rd quarter with another touchdown drive as Gladstone found Landon Wells to give the Green 18 straight points and a 26-20 lead.

Corbin Taylor of King City provided an offensive spark for the Silvers with a long catch with 8:27 to go in the 4th. That catch set up Peyton McFrederick for a short run that tied the game at 26.

The Green answered with Gladstone’s 40 yard run about 2 minutes later. Gladstone’s sprint and the 2-point conversion run by Orrick’s Blake Buchanan gave the Green a 34-26 lead.

The Silver threatened with a goal-to-go possession in the final 2 minutes the game, but a pass to Corbin Taylor went incomplete, and the Green All Stars ran out the clock.

At halftime of the game, Brian Messer of Mound City and Daniel Carpenter of Hardin Central were inducted into the Missouri 8-Man Coaches Association Hall of Fame.