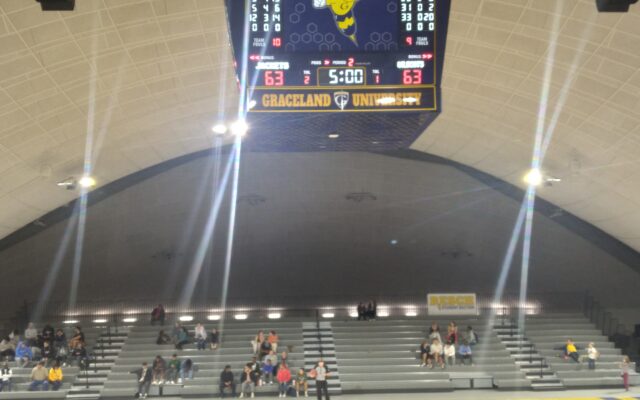 Graceland 59 William Penn 51
Analeza Edore and Heaven Mbaruk commanded a presence inside for the Graceland Women’s Basketball team Saturday afternoon. Both posted double-doubles as Graceland defeated William Penn 59-51 and won the season series against the Statesmen and snapped a five-game losing streak. Graceland had a big first quarter scoring from Mbaruk. The senior went 5-5 from the field and scored 10 of Graceland’s 12 points. Analeza Edore scored 12 of Graceland’s 17 points in what turned out to be a decisive third quarter as Graceland took a five-point lead going into the 4th. Graceland shot 38% from the field but they outrebounded William Penn 48-33.   Graceland was led and rebounding by Mbaruk with 12 and Edore had 10.

Graceland is now 9-11 overall and 4-10 and the Heart of America Conference. Graceland will be hosting Evangel on Wednesday evening at the Morden Center.

Northwest improves to 10-8 overall and 5-7 in MIAA action.

At the break, Northwest and Lincoln were knotted up at 27-27.

Northwest had another 9-2 run to open the second half. Kelsey Fields had seven of the Bearcats points during the run including her first three-pointer of the season.

Northwest outscored the Blue tigers 23-11 in the third quarter as they led 50-38 heading into the final 10 minutes of play. Kelsey Fields scored 17 of Northwest’s 23 third quarter points while also recording her fifth double-double of the season.

Kelsey Fields led all scorers with a career-high 20 points as well as a career-high 16 rebounds. Fields was 8-of-10 from the field, 1-for-1 from three, and added two blocks. Molly Hartnett was the second leading scorer for Northwest with 15 points while going a perfect 7-of-7 from the free throw line. Jillian Fleming tallied nine points and went 2-for-4 from beyond the arc.

Northwest is on the road next week at Nebraska-Kearney and at Fort Hays State.

William Penn 64 Graceland 58
The Graceland Men’s Basketball team pushed 13th-rated and Heart of America Conference unbeaten William Penn down to the final minute, but William Penn did sneak out of the Morden Center on Saturday evening with a 64-58 win and snapped Graceland’s five-game conference winning streak. Graceland made a spurt late in the first half to get to within 32-29 at halftime after William Penn had open an 8-point lead with just over 1 minute remaining. In the second half, William Penn started to pull away and took a 55-42 lead with just under 8 minutes remaining. When challenged to respond, Graceland did, thanks to a run which included 3-point shots by Seth Compas and Mario Johnson. Graceland actually took a one-point lead on a run out dunk from Seth Compas with 3 minutes remaining. William Penn got the lead back on their next possession and then scored the last 5 points in the game. The Graceland men are now 7-7 in the Heart of America Conference and are 12-8 overall. Their stretch of 4 straight games at home continues Wednesday evening when they face Evangel.

Northwest improved to 17-2 overall and 10-2 in MIAA play. It is the 11th straight win at home for the Bearcats.

Senior guard Diego Bernard notched his second straight 20-point game in leading Northwest to its 17th consecutive win over Lincoln in the series between the two programs.

The 38 points allowed ranks as the second-lowest point total for an opposing team in the McCollum coaching era at Northwest. Central Missouri scored 37 points against Northwest on Jan. 30, 2021 for the lowest opponent scoring total.

The Bearcats will hit the road this week with games at Nebraska-Kearney (Thursday) and Fort Hays State (Saturday).