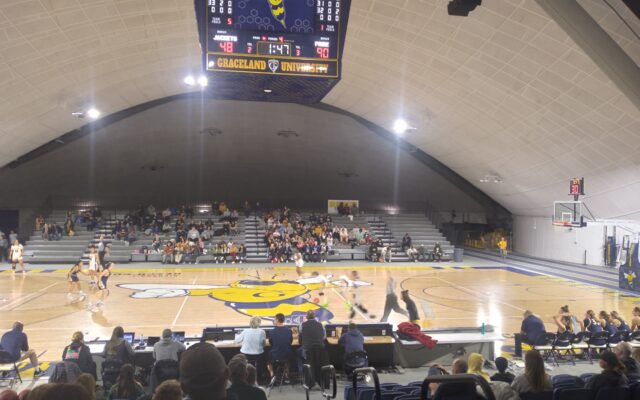 Clarke 90 Graceland 51
The Clarke Women’s Basketball team shot 54% from 3-point territory and put away their Heart of America Conference Women’s basketball game with Graceland Thursday evening in the 3rd quarter. Clarke defeated Graceland 90-51 in Lamoni. Clarke is the 8th-rated team in NAIA Women’s Basketball. They moved their record to 17-2 overall. They are 11-2 in the Heart of America Conference. Graceland’s Women hung around in the first half thanks and large part to their defense. Graceland had most of their 11 steals in the first half of the game. They were within two points with 5:42 to go in the second quarter. But Clarke extended the lead to 41-30 at halftime. Clarke then hit 6 3-point shots on 6-9 shooting in the third period, scored 38 points and turned an 8-point lead into a 31 point lead going into the 4th quarter. Graceland was led in scoring by Heaven Mbaruk who had 12 points. Janiyah Davis scored 11 for Graceland. The Graceland Women are 8-11 overall and 3-10 in the Heart of America Conference. The Graceland Women will host William Penn Saturday afternoon at 2:00 p.m. at the Morden Center

Central Missouri 68 Northwest Missouri State 68
The Northwest Missouri State women’s basketball team dropped a last second nail-biter to the No. 5 Central Missouri Jennies, 68-67. Northwest led 37-30 in the first half, and the Jennies did not get their first lead until 3:37 to go in the 3rd quarter. UCM drew a shooting foul with just under one second to play to send the Jennies to the line for two shots. After missing the first free throw, UCM made the second to take a 68-67 lead with .6 seconds left to play.