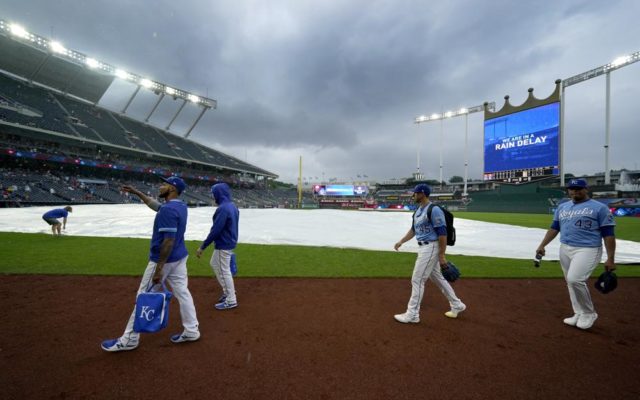 Kansas City Royals pitchers walk from the bull pen to the dugout during a rain delay in the seventh inning of a baseball game against the Cincinnati Reds Wednesday, July 7, 2021, in Kansas City, Mo. (AP Photo/Charlie Riedel)

KANSAS CITY, Mo. (AP) — Sonny Gray gave up two runs over seven innings, and Jonathan India hit a two-run double as the Cincinnati Reds rallied for three runs in the seventh inning and beat the Kansas City Royals 5-2 on Wednesday.

“It was a hot day. He was battling,” Cincinnati manager David Bell said. “And probably around the fourth inning or so, I didn’t know how much more he had left. It really does speak to number one, how great of a competitor he is. He found a way, and in that process of finding a way to kind of gather himself and get back out there.”

“I feel like I definitely had an edge, maybe I was just trying to fake it until I could make it,” he said. “I tried all my tricks to get my nerves gone and I guess they just slowly went away where I could just go.”

A day after blowing a 6-1 lead entering the eighth inning, the Reds bullpen came through.

“Every now and then, sometimes a win is maybe a little bit more than a win, and maybe today was one of those days,” Bell said.

Art Warren stranded the bases loaded in the eighth by retiring Hunter Dozier on an inning-ending flyout to deep left.

“As soon as he hit it, I thought it was gone,” Royals manager Mike Matheny said. “It didn’t sound good when it came off the bat, but it looked right. We were probably wishing it out of the ballpark as much as anything, but it was so close to being what we were looking for.”

Heath Hembree pitched a perfect ninth for his fourth save in five chances, helping the Reds to their second win in the three-game series.

The game was interrupted by rain for 1 hour, 12 minutes.

Jorge Soler put the Royals ahead in the fourth with a slow roller to third with one out and two on. Eugenio Suárez threw to second for a forceout but India, the second baseman, hit the helmet of Ryan O’Hearn as he threw to first trying for an inning-ending double play. The ball popped into the air, and by the time the ball was retrieved, Carlos Santana slid home ahead of the throw.

Singles by Dozier and Michael A. Taylor led to a 2-0 lead.

Cincinnati went ahead in the seventh after Tucker Barnhart singled off Brady Singer and Scott Barlow (2-3) relieved.

Shogo Akiyama and Mike Freeman singled, cutting the deficit, and India doubled for a 3-2 lead.

Akayama added an RBI double in the eighth, and Tyler Naquin hit an RBI single in the ninth.

Singer gave up one run and five hits in six-plus innings.

“He had great tempo,” Matheny said. “His slider was sharp. His fastball was locating on both sides. He had a lot of movement today. You could tell by a lot of their reactions. I thought he did a great job of pounding the zone and trusting his defense.”

Royals: LHP Danny Duffy (4-3, 2.60 ERA), seeking his first win since May 1, starts Thursday at Cleveland. He is 5-13 with a 4.81 ERA in 21 starts and four relief appearances against the Indians, his most losses against any opponent