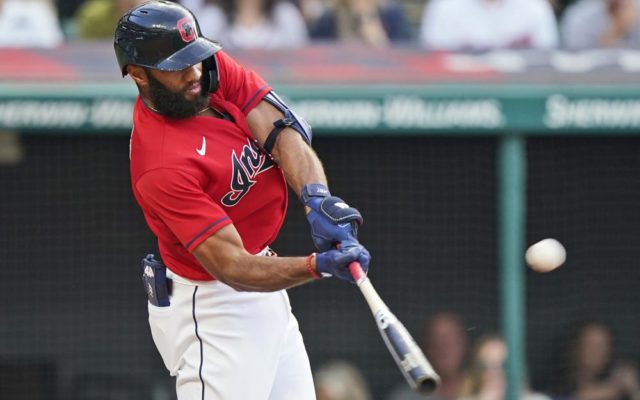 Cleveland staggered into the series on a nine-game losing streak, but won the first two games on ninth-inning homers by Franmil Reyes on Thursday and Bobby Bradley on Friday. The Indians have beaten the Royals eight straight times this season.

Mercado thinks the momentum from the back-to-back walk-off wins carried over into Saturday’s game.

“That’ll light a fire in any ballclub,” he said. “Everyone wants to win, but just the fact that the last two nights you get to go out and win in walk-off fashion with home runs, that really just sets the tone and brings the energy life back into the clubhouse.”

The Royals have dropped 15 of 18 to fall a season-worst 17 games under .500. Salvador Pérez hit a two-run homer in the fourth, but the Royals’ All-Star catcher was removed in the sixth with back tightness. Kansas City manager Mike Matheny said the tightness was the result of a diving play Pérez made catching a foul bunt in the third.

“It was aggravated, we’ll get him in there and have (the trainers) take a look at him, but we’re going to have to see how he feels tomorrow,” Matheny said.

Cal Quantrill (1-2), one of several pitchers trying to give Cleveland’s injury-riddled rotation a boost, allowed three runs in six innings.

Cleveland finally had success against Minor in the bottom half. Bradley hit an RBI double and Mercado’s run-scoring single tied the game. Bradley Zimmer’s hard grounder off Minor’s leg went for an RBI single.

Hernandez followed with a drive to left-center, giving Cleveland a 6-2 lead.

Minor had dominated the Indians in his career, going 3-0 and allowing four earned runs in 28 2/3 innings over nine appearances. The left-hander gave up six runs and nine hits in four innings.

Perez warmed up for his matchup in Monday’s All-Star Home Run Derby against Pete Alonso of the New York Mets with his 21st of the season. Alonso won the most recent derby in Cleveland in 2019.

Royals reliever Kyle Zimmer struck out his brother, Bradley, in the seventh in the first major league matchup between the two which came following Mercado’s home run. Several members of the Zimmer family were at Progressive Field for the game.

“They were all here,” Bradley said. “I’m sure I’ll hear all about it.”

Kyle Zimmer was the fifth overall pick in 2012 while Bradley was the 21st overall pick in 2014. The two faced each other in a Triple-A game this season with Bradley getting a single. Bradley Zimmer said their parents have always looked forward to when then brothers would face off.

“They talk about it non-stop, and try to play out the scenarios of how it’s going to happen,” he said. “I’m sure they’re beside themselves that it finally happened in the major leagues.”

“The hard part right now with it is, is the amount of work they do with their shoulder is obviously intense and a lot,” Francona said. “Then when you take some time off, some of the muscles can get a little cranky. So now you’re starting up again and it’s like OK what’s cranky — so trying to determine that. But then today he came in and he felt like he was gonna have a better day, which is good.”

Bieber, the reigning AL Cy Young Award winner, has been sidelined since June 14.

Royals second baseman Whit Merrifield, who was voted in by the players ballot, will replace Jose Altuve in Tuesday’s All-Star Game in Denver.

“It’s an incredible honor to be voted in by my fellow players,” Merrifield said. “It means the most, frankly. The fan vote is great and we appreciate all the support we get from the fans but nobody knows what this game is like more than the players.”

Royals: 1B Carlos Santana injured his left wrist in the first inning but remained in the game. Third baseman Hunter Dozier’s throw on a bunt hit pulled Santana into the path of Hernández. Santana was checked by a trainer.

Rookie RHP Eli Morgan (1-3) will start the final game before the All-Star break for the Indians. RHP Carlos Hernández (1-0) will start for the Royals.