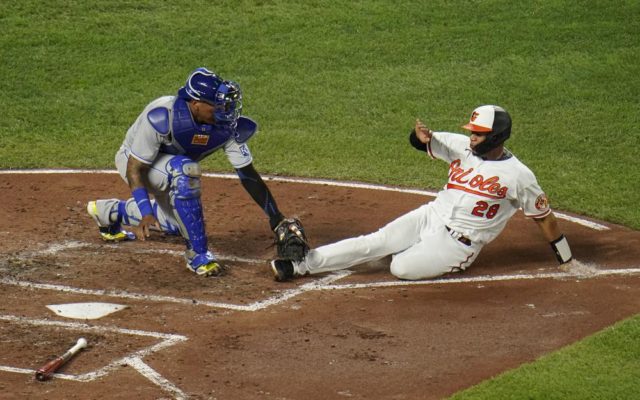 Kansas City Royals catcher Salvador Perez, left, tags out Baltimore Orioles' Pedro Severino who was attempting to score on a single by Jahmai Jones during the second inning of a baseball game, Thursday, Sept. 9, 2021, in Baltimore. (AP Photo/Julio Cortez)

BALTIMORE (AP) — Carlos Hernández delivered another impressive start for Kansas City — and this time the Royals closed out the game without incident.

Hernández allowed three hits in six innings, and Nicky Lopez and Hunter Dozier homered as the Royals beat the Baltimore Orioles 6-0 on Thursday night. The previous night, Kansas City allowed nine runs in the eighth inning, wasting a fine start by Mike Minor and losing to the Orioles 9-8.

“He was really good,” Orioles manger Brandon Hyde said. “Besides the homer to Lopez early and the double to Dozier there in the eighth inning, he was (in) complete command.”

The closest the Orioles came to scoring was in the second, when Jahmai Jones singled with men on first and second. Left fielder Andrew Benintendi’s throw to the plate was in time to retire Pedro Severino, who was trying to score with two outs.

Lopez hit a solo homer with one out in the first, and the Royals added three more runs in the eighth. Lopez singled home a run and later scored on Benintendi’s single. Carlos Santana hit an RBI groundout.

“I was just frustrated I couldn’t get through that eighth,” said Means, who was taken out after allowing a leadoff double to Dozier. “I’ve got to be able to go out and finish — my pitch count’s not very high — and I wasn’t able to do that. That’s the only negative thing that I really have.”

Dozier added a two-run homer in the ninth, his 11th of the season.

Kansas City won for only the fifth time in its last 19 games in Baltimore.

Lopez had three hits for Kansas City. He also singled in the third.

“It’s one of the great stories in the game in my opinion,” manager Mike Matheny said. “The guy who didn’t make our club coming out of spring, and now is leading our team as far as average goes, and his OPS, his quality at-bats in tough situations.”

The homer was Lopez’s second of the year.

Baltimore outfielder Austin Hays, who is on a 15-game hitting streak, did not play. DJ Stewart played left field and went 0 for 3.

Orioles: RHP Matt Harvey (right knee) was placed on the 10-day IL, and INF Richie Martin was recalled from Triple-A Norfolk. … INF Ramón Urias, who had a key pinch-hit in Wednesday night’s win, has not started the last four games due to upper leg soreness. … DH Trey Mancini returned to the lineup after missing three games with oblique soreness.

Kansas City plays at Minnesota on Friday night. The Royals send Daniel Lynch (4-4) to the mound against Griffin Jax (3-3).