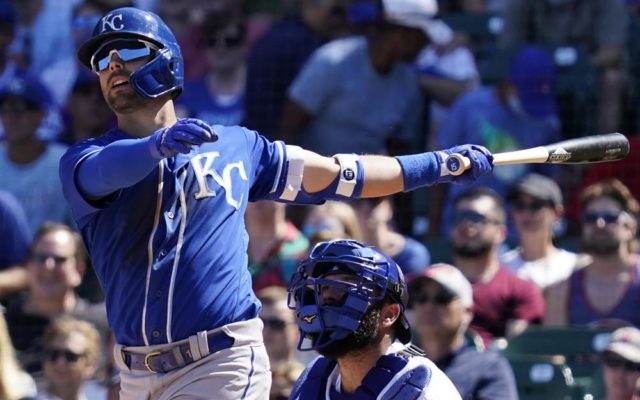 CHICAGO (AP) — Andrew Benintendi drove in three runs, and the Kansas City Royals beat the sliding Chicago Cubs 9-1 on Sunday for a sweep of their weekend series.

It was Chicago’s franchise-record 13th consecutive loss at Wrigley Field.

Royals right-hander Carlos Hernández (4-1) struck out a career-high eight in seven innings, also a career best. He allowed one run and four hits.

Frank Schwindel had two hits for the Cubs, who have dropped 18 of 22 since trading away stars Kris Bryant, Anthony Rizzo, Javier Báez and Craig Kimbrel.

“Listen, it’s no fun to lose,” Cubs manager David Ross said. “It’s like, nobody is having a good time.”

Benintendi helped Kansas City get off to a fast start. He singled, advanced on second baseman Matt Duffy’s error and scored on Dozier’s single in the second. He added a two-run double in the third against Alec Mills (5-6).

“I wish I knew,” Whit Merrifield said of the 55-68 Royals’ recent success. “If we all knew, we would have been doing this in April and continued it through the course of the year. That’s how it goes sometimes.”

Merrifield’s sacrifice fly and Nicky Lopez’s single extended the lead to 5-0 in the fourth.

The Cubs got one back in the bottom half, with some help from the Royals. Center fielder Michael A. Taylor and right fielder Dozier misplayed Ian Happ’s fly ball into a ground-rule double. Both outfielders pursued the ball before it dropped between them. Happ scored on Duffy’s single.

Mills was charged with seven runs, six earned, and 11 hits in four-plus innings.

“You gotta do what you gotta do,” Royals manager Mike Matheny said. “You pull into this park and see the flags like they were today, elevating is not the secret. It’s doing exactly what they did. That was a relentless offensive attack, guys moving runners over.”

Royals: C Salvador Perez returned to the lineup. He was scratched Saturday before he pinch-hit in the ninth and grounded out. Perez left Friday’s game in the eighth due to a headache after a foul tip hit him two innings earlier.

Cubs: INF Nico Hoerner (right oblique strain) exited the first game of his rehab assignment with Class A South Bend during his third-inning at-bat. He felt increased tension across his oblique and pulled himself as a precaution, according to the Cubs. Hoerner was originally scheduled to continue his rehab with Triple-A Iowa later this week. Ross said Hoerner will primarily play shortstop when he comes off the IL. …C Willson Contreras (right knee sprain) has been doing some catching and may see time at designated hitter when he returns, Ross said. The Cubs play the White Sox and Twins this month.

Royals: LHP Daniel Lynch (3-3, 5.12 ERA) is set to make his second straight start against the Astros to begin Monday’s series at Houston. RHP Zack Greinke (11-3, 3.43 ERA) will pitch for the Astros.