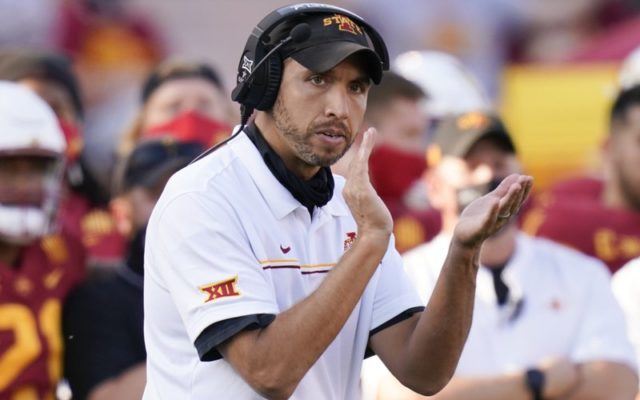 FILE - In this Oct. 10, 2020, file photo, Iowa State head coach Matt Campbell reacts on the sideline during the second half of an NCAA college football game against Texas Tech in Ames, Iowa. Campbell has agreed to a new eight-year contract through 2028 after leading the Cyclones to the Big 12 championship game and a New Year's Six bowl. The school did not release terms of the contract Monday, Feb. 8, 2021. (AP Photo/Charlie Neibergall, File)

AMES, Iowa (AP) — Iowa State coach Matt Campbell has agreed to a new eight-year contract through 2028 after leading the Cyclones to the Big 12 championship game and a New Year’s Six bowl.

The school did not release terms of the contract Monday.

The Cyclones are coming off their most successful season in school history. They were 9-3 overall and first in the Big 12 at 8-1. They lost to Oklahoma in the conference championship game, then beat Oregon in the Fiesta Bowl and were No. 9 in the final Associated Press Top 25.

Iowa State also agreed to provide Campbell a total of $3 million for staff salary increases over the next three years.

Campbell is 35-28 in five seasons at Iowa State and has been named Big 12 coach of the year three times, including in 2020.

“Coach Campbell has always put investments in his student-athletes and football staff before his own personal gains,” athletic director Jamie Pollard said. “That is the essence of servant leadership and is what makes Coach Campbell so successful.”

Iowa State this spring will open a $90 million Sports Performance Center, which will house the Cyclones football team and all of the program’s support services.

“I am extremely thankful to our president, Dr. (Wendy) Wintersteen and our athletic director, Jamie Pollard, for supporting our staff and program,” Campbell said. “The university has made a terrific commitment to Cyclone football and I’m thrilled to continue to move this program forward.”