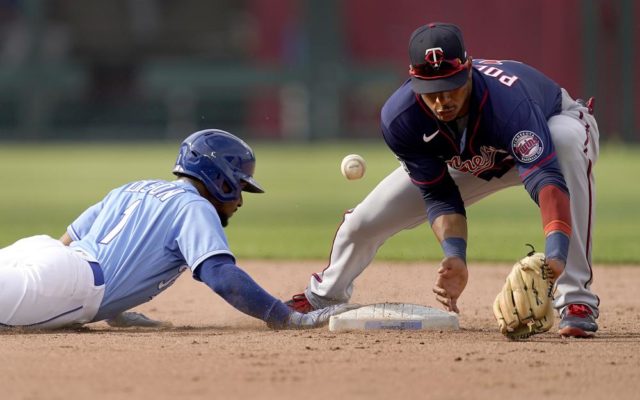 Kansas City Royals' Jarrod Dyson beats the tag by Minnesota Twins second baseman Jorge Polanco as he dove back to second on a ground out hit into by Jorge Soler during the ninth inning of a baseball game Saturday, June 5, 2021, in Kansas City, Mo. The Twins won 5-4. (AP Photo/Charlie Riedel)

Tyler Duffy and Taylor Rogers each got three straight outs, and Hansel Robles gave up Kelvin Gutiérrez’s leadoff double in the ninth before getting his fifth save in seven chances.

Jorge Soler grounded to shortstop Andrelton Simmons, who bobbled the ball and threw to Sanó at first for the out. Sanó threw to second, trying to catch pinch-runner Jarrod Dyson off the base, and the ball got away from second baseman Jorge Polanco.

Simmons retrieved the ball and threw to third, where Dyson was called out by umpire Manny Gonzalez. But a video review determined Polanco got his arm onto the base under third baseman Josh Donaldson’s tag with a headfirst slide.

With the infield in, Michael A. Taylor lined an 0-2 pitch to Simmons. Dyson was halfway between third and home, and Simmons had an easy flip to third for the final out.

“It is fun being in the dugout when you finish a game like that,” Minnesota manager Rocco Baldelli said. “I think we played a well-played game and the excitement of the end was the cherry on top.”

“He did a good job executing and moving the ball in and out today,” said Jeffers, the Twins catcher,

Mike Minor (4-3) allowed five runs and seven hits in seven innings. He has given up 11 homers in 67 innings this season.

“It was the homer that got him today,” Kansas City manager Mike Matheny said. “He had all four pitches working today, but a couple of pitches in the wrong spot at the wrong time ended up getting us.”

Jeffres hit a two-run homer in the second, Garlick went deep in the third and Sanó’s 449-foot, two-run drive in the sixth overcame a 4-3 deficit.

Nelson Cruz had two hits, a walk and his first stolen base since 2018.

Whit Merrifield hit a two-run single in the second and Andrew Benintendi hit a two-run homer in the fifth, his sixth home run this season.

Minnesota selected the contract of RHP Griffin Jax from Triple-A St. Paul. RHP Juan Minaya was designated for assignment, a day after he struck out three in 2 1/3 innings of relief.