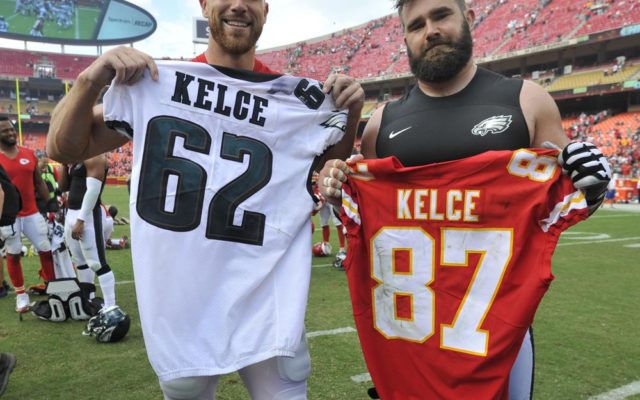 Travis Kelce and Jason Kelce are both three-time All-Pro picks and each has won a Super Bowl. The big advantage: Travis is 2-0 against his older brother.

The Kelce brothers face off one more time when the Philadelphia Eagles (1-2) host the Kansas City Chiefs (1-2) on Sunday.

Both teams have lost two in a row so neither brother has room to brag this week.

“There’s hardly much of any trash-talking, especially when we both just we’re coming off two losses each, so I’m pretty sure we’re both just focused on trying to get in the right direction and get back to the winning aspect of football,” Travis said on the AP Pro Football Podcast.

Jason, a four-time Pro Bowl center, is one of only two remaining healthy starters on Philadelphia’s offensive line.

Travis, a six-time Pro Bowl tight end, is in an unfamiliar spot with the two-time defending AFC champion Chiefs, who haven’t had a losing record since Week 10 of the 2015 season.

Jason has to handle ticket requests for friends and family since the Eagles are the home team. Travis is well aware of the reputation of the fans in Philadelphia, but he’s not warning anyone to keep their red jerseys at home.

“Eagles fans have been good to me, the Gang Green has been good to me so maybe if they have an 87 jersey on they might be a little more lenient toward those Chiefs fans in the stands,” he said.

While the Kelce brothers have a reunion, Chiefs coach Andy Reid returns to Philadelphia for the second time since he was fired following the 2012 season. Reid has more wins than any coach in Eagles history and he’s 2-0 against his former team. He’s seeking his 100th win with the Chiefs.

Patrick Mahomes had been 11-0 with 35 touchdowns and zero interceptions before the Chiefs lost to Baltimore two weeks ago. He threw his first two picks of the month in last week’s loss at the Chargers.

“We’ve kind of dug ourselves a hole,” Mahomes said. “We’ve lost these games we don’t usually lose until later in the season. It’s my first time coming out of September or right at the end of it and not having a winning record so it’s about how we respond. That comes with every single day and how we practice. It comes with how we study the film and at the end of the day it’s how we play on Sundays so I’m for the challenge and I know the guys in the locker room are excited as well.”

Jalen Hurts threw his first two picks of the season in Philadelphia’s 41-21 loss at Dallas on Monday night. One of those was returned for a touchdown and the other was another underthrown deep ball. Hurts finished strong with a pair of TD passes in the second half and 326 yards passing overall. He blamed himself for the loss afterward.

“I don’t think he played his best game, I don’t think he played a bad game,” Eagles coach Nick Sirianni said. “There’s improvement. We all need to improve. When you lose like we lost on Monday night, everybody needs to improve. Everybody needs to look in the mirror, starting with myself. And people are going to look up to Jalen and the things that he says and he does, and he leads by example, so I’m glad that he’s living that way and taking his responsibilities as he needs to. That doesn’t surprise me, though.”

The Eagles had three runs by their running backs against Dallas. Hurts carried nine times on run-pass option plays, scrambles and broken plays. Miles Sanders gained 24 yards on one of his two carries and has the NFL’s third-best average yards per rush (4.9) since his rookie season in 2019.

He wants the ball without saying it.

“Not necessarily myself, but to have a successful offense you have to run the ball,” he said.

“He’s a pivotal part of this offense, one of the top running backs in the league,” Hurts said. “He’s got to get his.”

The Chiefs signed former All-Pro wide receiver Josh Gordon this week, but Reid already said he’s not playing against the Eagles. The 30-year-old Gordon led the league with 1,646 yards receiving during the 2013 season in Cleveland. But he struggled with off-the-field issues that led to six suspensions over a span of six years, five of them for some form of substance abuse.