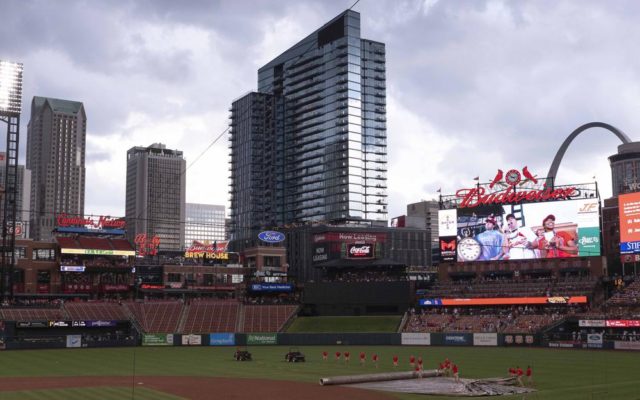 Busch Stadium is viewed as the field crew puts on the tarp during a rain delay in a baseball game between the Pittsburgh Pirates and the St. Louis Cardinals Sunday, June 27, 2021, in St. Louis. (AP Photo/Joe Puetz)

ST. LOUIS (AP) — The only thing that got in Max Kranick’s way was the weather.

Kranick pitched five perfect innings in his major league debut before a 64-minute rain delay forced him from the game, and the Pittsburgh Pirates went on to beat the St. Louis Cardinals 7-2 Sunday.

In a season in which there have already been a modern-day record seven no-hitters, Kranick (1-0) made a bid for perhaps the most unlikely premiere pitching performance of all-time.

The 23-year-old righty, who had never pitched above the High-A levels of the minors until this season, set down all 15 batters he faced against a Cardinals lineup that included All-Stars Nolan Arenado, Paul Goldschmidt and Yadier Molina.

Kranick struck out three and threw only 50 pitches, 36 for strikes. The Pirates led 7-0 when the rain forced a halt, ending the perfect-game bid by the 11th-round pick in the 2016 draft.

“He came right out executing his fastball and went right after a good lineup,” Pirates manager Derek Shelton said. “It was very impressive. It was unfortunate that the rain stopped him.”

Duane Underwood Jr. relieved to begin the sixth. He quickly set the side down before giving up a leadoff double to Dylan Carlson to begin the seventh.

Kranick became the first pitcher since 1893 to leave after at least five innings with a perfect game intact in his MLB debut, the Elias Sports Bureau said. He did so in front of 18 friends and family members.

St. Louis outfielder Lars Nootbaar homered off Kranick earlier this month in a Triple-A contest. Nootbaar flied out in his only at-bat on Sunday.

Nootbaar complimented Kranick, adding, “we missed some balls that maybe we could have hit.”

Gregory Polanco and Ben Gamel each hit solo homers for the Pirates, who won have won six of nine following a season-high 10-game losing streak. Bryan Reynolds drove in a pair of runs for Pittsburgh.

St. Louis, which had three hits, has lost six of seven.

Reynolds stretched his hitting streak to 12 games with run-scoring hits in the first and fourth innings. It is the longest active streak in the National League.

Pittsburgh scored three times in the first off Johan Oviedo (0-4), who allowed five runs on six hits over four innings.

Polanco and Gamel homered in the fifth off reliever Jake Woodford.

Adam Frazier had three hits and reached base four times for the Pirates.

The Cardinals have lost eight of 10.

Former United States Olympic gymnast Shannon Miller tossed out the first pitch. The 44-year-old Miller, who won seven Olympic medals, did a midair flip off the mound before delivering the pitch to the plate. She is in town as part of the USA Olympic gymnastic team trials, which ended on Sunday.

Cardinals: OF Harrison Bader went 1 for 4 in a rehab stint with Class A Palm Beach on Saturday. Bader has missed 30 games due to a fractured rib suffered on May 24.

Pirates: LHP Tyler Anderson (3-7, 4.82) will face LHP Kyle Freeland (0-2, 7.75) on Monday in the first of a three-game series in Colorado. Anderson has lost four straight decisions and five of his last six.

Cardinals: LHP Wade LeBlanc (0-1, 6.75) will take on RHP Jake Faria (0-0, 4.50) on Monday in the first of a three-game series against Arizona in St. Louis. LeBlanc, who was signed as a free agent on June 17, has gone six innings or more in five of 10 career starts against the Diamondbacks.