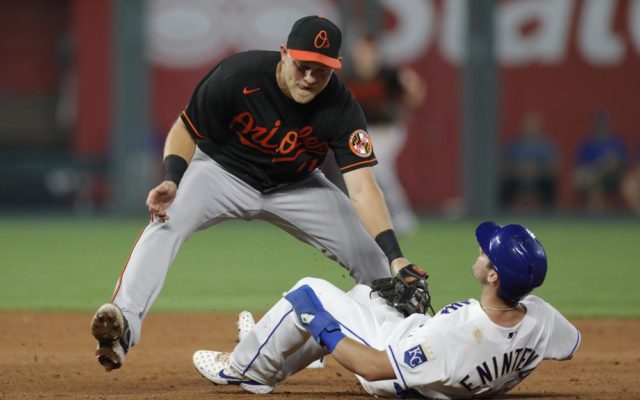 KANSAS CITY, Mo. (AP) — Nicky Lopez drove in four runs to lead the Kansas City Royals to a 9-2 victory over the Baltimore Orioles on Friday night.

“It is a product of him getting over the stage of worrying about getting on the field every day, as everyone goes through,” Whit Merrifield said. “He can relax, play his game and it is perfect for what we are looking for at our nine-spot.”

The Royals built a 6-0 lead through the first three innings behind Lopez and the All-Star duo of Salvador Perez and Merrifield. Perez hit RBI singles in the first and third innings. Merrifield added an RBI double in the second and a sacrifice fly in the third.

“It was a good day all the way around,” Royals manager Mike Matheny said. “I am really happy with the offensive production we had today and the aggressiveness on the bases.”

Keegan Akin (0-5) gave up six runs on eight hits in three innings, with three walks and two strikeouts. Lopez did the bulk of the damage with a two-run single to highlight a four-run second inning.

Merrifield went 4 for 5 with three RBIs, including a run-scoring single in the seventh inning. Kansas City finished with 15 hits.

Pedro Severino hit a solo homer in the eighth. Scott Barlow closed out the game for the Royals.

Trey Mancini put the Orioles on the board with an RBI groundout in the fourth. Cedric Mullins went 2 for 3. The Orioles finished with five hits and stranded six runners.

Royals: C Cam Gallagher was reinstated from the 10-day IL. C Sebastian Rivero was optioned in the corresponding move.

Brady Singer (3-6, 4.52 ERA) will take the mound for Kansas City. Baltimore did not announce its starting pitcher.