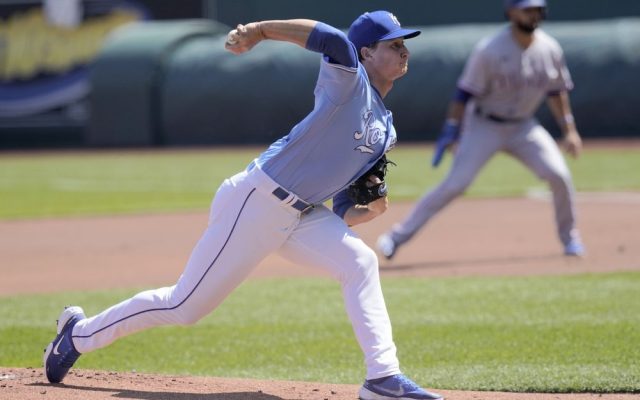 KANSAS CITY, Mo. (AP) — Nate Lowe hit a towering, three-run homer and the Texas Rangers figured how to hold onto a big lead, beating the Kansas City Royals 7-3 Sunday for their first win of the season.

Texas blew a five-run edge on opening day and a four-run lead Saturday. Boosted by Lowe, the Rangers avoided a sweep.

Lowe connected in the third for a 3-0 lead. He has nine RBIs in the first three games of the season, a Texas record.

Isiah Kiner-Falefa also drove in three runs. He had a two-run single in the fourth as Texas took a 6-0 lead and a homer in the ninth off Wade Davis.

“We didn’t pitch to our liking the first two games so I set the tone and it felt really good,” Lyles said. “I’m excited where my stuff is and we executed really well today.”

“We executed the game plan really well and that was the best I’ve seen Jordan pitch in a Texas uniform,” Rangers manager Chris Woodward said. “He went right after these guys and you could see the conviction he had in his pitches.”

Salvador Pérez hit a two-run homer in the Royals’ sixth.

Michael A. Taylor, who homered and drove in three runs in each of Kansas City’s first two games, went 1 for 4. He scored a run in the ninth on a single by Hanser Alberto off former Royals pitcher Ian Kennedy.

Brady Singer (0-1) gave up five earned run on five hits and three walks in 3 1/3 innings. He threw 77 pitches, the fewest in any of his outings in a two-year career.

“We need our starters to go deeper and we can’t expect our offense do that every night,” Royals manager Mike Matheny said. “So we need them to give us a chance going forward.”

Rangers: Kiner-Falefa was hit in the left hand by Singer in the third inning. He finished the game.

Royals: 3B Hunter Dozier didn’t play for the second straight game because his right hand is swollen. He left Thursday’s opener after apparently hurting himself on a swing. Matheny doesn’t expect Dozier to miss much time.

Royals: Play at Cleveland on Monday as Danny Duffy starts after going 4-4 with a 4.95 ERA last season.