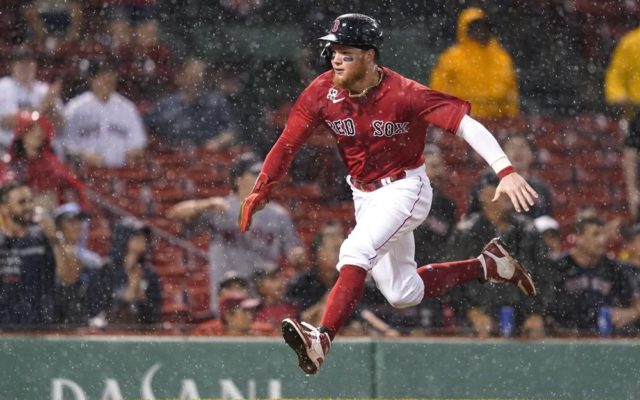 Boston Red Sox's Alex Verdugo runs home to score on a single by Xander Bogaerts during the fifth inning of the team's baseball game against the Kansas City Royals at Fenway Park, Wednesday, June 30, 2021, in Boston. (AP Photo/Elise Amendola)

First pitch was pushed back 41 minutes and umpires stopped play for 1 hour, 56 minutes in the middle of the sixth, but the teams managed to play nine innings.

“Martin was outstanding. He did an outstanding job,” Red Sox manager Alex Cora said. “Tough conditions towards the end of his outing.”

He allowed a homer to Salvador Pérez leading off the second. Pérez’s homer came during a 4-for-4 night.

“That’s doing it in a big way. Four hits is hard to do,” Royals manager Mike Matheny said of Perez’s game. “He gave us a good jolt.”

Martinez hit a three-run homer in the third, his 16th of the season, for a 3-1 lead. Renfroe added a solo shot in the eighth.

Xander Bogaerts and Marwin Gonzalez each had two hits for Boston.

Royals right-hander Richard Lovelady was struck by Martinez’s line-drive comebacker in the seventh and left the game. He pitched 1 2/3 perfect innings in his season debut.

“Fortunately, it missed all of the ribs,” Matheny said. “Doctors already checked him out and believe that everything checked out well internally.”

Royals: Although there is no timetable yet for the return of C Cam Gallagher (right shoulder impingement syndrome), manager Mike Matheny said Gallagher threw “a little bit more” on Tuesday. … INF Emmanuel Rivera, who made his major league debut on Monday, suffered a left hamate fracture during Tuesday’s game at Boston. He was placed on the 10-day injured list Wednesday. … INF Nicky Lopez was not in the starting lineup Wednesday, but it was not related to the foul ball he hit off his foot on Tuesday.