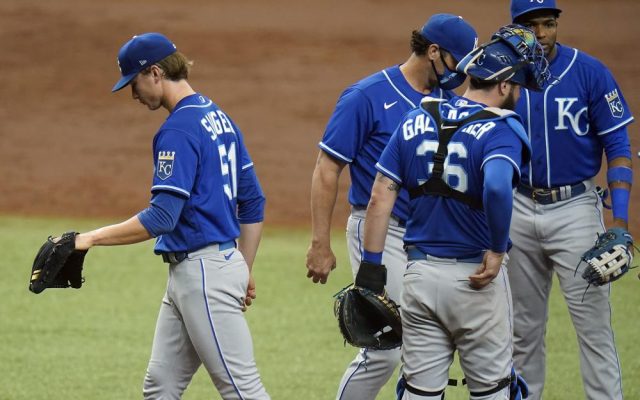 Kansas City Royals starting pitcher Brady Singer (51) is taken out of the game against the Tampa Bay Rays during the third inning of a baseball game Thursday, May 27, 2021, in St. Petersburg, Fla. (AP Photo/Chris O'Meara)

“I think they understand we’re on a good run right now, they don’t take it for granted,” Rays manager Kevin Cash said. “They know they’ve got to come to the ballpark, work and perform. Fortunately we’ve got a group of guys that take that mindset every day.”

Meadows had a two-run triple in the first and connected on a third-inning two-run homer.

“It was a good feeling, especially do that early in the game,” Meadows said. “I feel like I was seeing the ball well off of Singer. Just trying to be aggressive early. Just reacted on some mistakes he made in the zone.

McClanahan (2-0) scattered three hits and struck out six. The rookie has allowed one run in his last 10 innings after giving up 11 over his first 17 1/3 innings.

Joey Wendle, Taylor Walls, Randy Arozarena also had RBIs for the Rays, who have scored six runs or more in 10 of their last 14 games,

Kansas City got a two-run homer from Ryan O’Hearn.

Meadows had the lone hit, a two-run triple, during a three-run first off Brady Singer (2-4). Brandon Lowe was hit by a pitch and Ji-Man Choi walked with one out before scoring on Meadows’ hit.

“I think a couple of those mistakes in the first hurt, and the first inning kind of set a tone.” Royals manager Mike Matheny said of Singer. “Just one of those days, you could tell he was fighting it a little bit, trying to amp up and that wasn’t working.”

Singer gave up six runs and four hits in 2 2/3 innings.

Meadows got Tampa Bay’s second hit, a two-run drive during a three-run third that made it 6-0. He has three homers and 16 RBIs in his last 13 games.

Meadows came up with the bases loaded and one out in the fourth but grounded into a double play against Jakob Junis.

O’Hearn entered defensively in the fifth and went deep one inning later off Michael Wacha.

The Royals scored five runs with 19 hits, 36 strikeouts and three walks in the three-game series. Five of the hits came off the Tampa Bay bullpen on Thursday.

The Rays begin a two-game series with the Philadelphia Phillies on Saturday in a matchup of two of the first three teams to surpass striking out 500 times this season. Tampa Bay, leading the majors with 549, is on pace for around 1,700, which would easily break Detroit’s big league record of 1,595 set in 2019. The Phillies have fanned 513 times.

Rays: LHP Ryan Yarbrough (2-3) will look to end a 23-start winless streak as starting pitcher Saturday against Philadelphia. It’s the longest stretch for a traditional starter since Atlanta’s Shelby Miller (24) from May 23–Sep 27, 2015. The lefty, who often follows an opener, is 25-5 as a reliever. RH Zack Wheeler (4-2) will start for the Phillies.