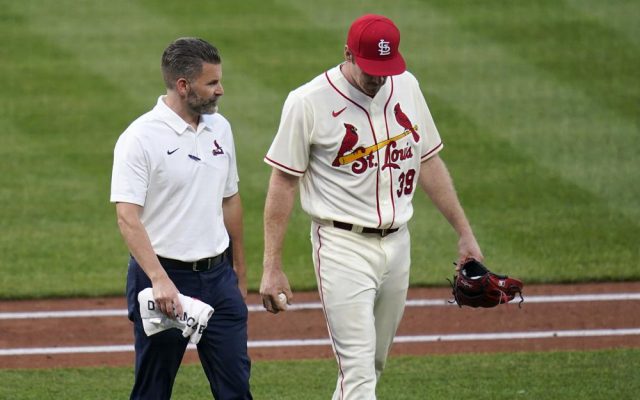 St. Louis Cardinals starting pitcher Miles Mikolas, right, walks off with trainer Adam Olsen the field before the start of the fifth inning of a baseball game against the Chicago Cubs Saturday, May 22, 2021, in St. Louis. Mikolas walked out to the field at the top of the inning but left before the start. (AP Photo/Jeff Roberson)

Molina broke a 1-1 tie when led off the seventh inning with his seventh home run this season, connecting on a slider with an 0-2 count from Adbert Alzolay (2-4).

“I mean, we were pounding him with fastballs in the beginning,” Alzolay said about Molina. “I was feeling good about my slider but I left the pitch right over the middle. He got a good swing and he hit a homer.”

As Molina was stepping into the batter’s box, the videoboard showed a marriage proposal. Molina paused before hitting and flashed a big smile at the moment the young couple kissed.

“That was awesome, big time,” Molina said. “Most of the time I don’t look at it, but this time I did and I was hoping she’d say yes. I was happy for them. That moment for them was unbelievable for them and I wish them the best for the wedding.”

Mikolas, a 32-year-old right-hander who won 18 games in 2018, was activated Saturday for his first major league start since the 2019 NL Championship Series. He missed last season after flexor tendon surgery, then hurt his pitching shoulder in his first bullpen session of 2021.

Manager Mike Shildt was Mikola was undergoing an MRI after the game.

““I have nothing substantial other than it’s in his forearm,” Shildt said. ”We’re clearly hoping for the best and a positive return. I appreciate him being honest about how he felt.”

Mikolas allowed three hits in four innings, struck out three and walked one, falling behind in the first after he bounced a breaking ball off Joc Pederson’s back foot with his second pitch. Willson Contreras hit a one-out single and Javier Báez had a two-out RBI single.

Mikolas was warming up to start the fifth, pitching to backup catcher Andrew Knizner while Molina was putting on his catcher’s gear after making the last out of the fourth, when the pitcher grabbed his right elbow then looked toward the Cardinals dugout. An athletic trainer, pitching coach Mike Maddux and then Shildt came out.

Mikolas, who had thrown 59 pitches, left with what the team called right forearm tightness.

Daniel Ponce de Leon entered and retired five batters around a walk, Genesis Cabrera (1-1) struck out three of his four batters, Giovanny Gallegos gave up a one-out single and a walk in the eighth and Alex Reyes finished a five-hitter to remain perfect in 14 save chances.

De Leon took his time getting warmed up. He recalled the last time he was in that situation and he hurried to pitch before he should have. The result then was a grand slam by Nolan Arenado, now his teammate.

“That was my second time doing this,” de Leon said. “I made sure I took my time and got loose. It went well.”

Alzolay gave up two runs and five hits over seven innings in his first start at Busch Stadium. He struck out six and walked none.

“I thought that was a really nice outing for him,” Chicago manager David Ross said.

Molina has 225 hits against the Cubs, the most among active Cardinals and tying Ozzie Smith for ninth-most. Molina’s 111 RBIs against the Cubs moved past Hall of Famer Ted Simmons into sole possession of eighth place.

Cubs INF Eric Sogard turned 35 Saturday. He pinch-hit in the ninth and grounded out.

Cardinals RHP Seth Elledge was optioned to Triple-A Memphis. Elledge has made four major-league appearances this season, allowing four runs and eight hits in 4 2/3 innings. He allowed all six inherited runners to score.

Cardinals: LF Dylan Carlson (back tightness) was scratched from the starting lineup. Thomas took his spot in right field. Shildt said Carlson is “day to day.” … SS Paul DeJong (fractured rib) won’t be activated from the 10-day injured list when eligible on Sunday. Shildt said that DeJong hasn’t been cleared for baseball activities. … LHP Andrew Miller (blister on toe of right foot) will pitch for Triple-A Memphis on a rehabilitation assignment Tuesday or Wednesday.