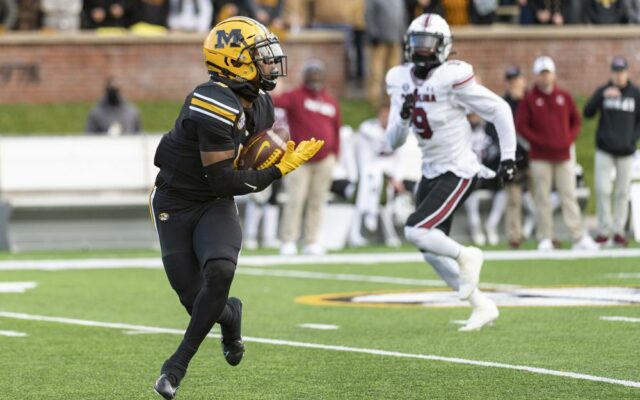 COLUMBIA, Mo. (AP) — Tyler Badie rushed 34 times for 209 yards and a touchdown and Missouri held off South Carolina’s fourth-quarter charge to defeat the Gamecocks 31-28 on Saturday.

The Tigers (5-5, 2-4 Southeastern Conference) built a 17-point lead when Badie scored on a 19-yard run with 12:31 left in the game. That’s when the opportunistic Gamecocks (5-5, 2-5 SEC) made things interesting by converting two Missouri turnovers into touchdowns and slicing the deficit to three points with 4:32 left. But they never saw the ball again, thanks to Badie, who rushed for 63 yards on the final drive.

The game turned late in the third quarter when blitzing safety Martez Manuel jarred the ball from South Carolina quarterback Jason Brown and defensive end Trajan Jeffcoat recovered in the end zone to give the Tigers a 10-point lead. Missouri’s Connor Bazelak completed 15 of 23 passes for 180 yards and two touchdowns. Mookie Cooper had three catches for 72 yards and a touchdown.

Brown, who was making his second start of the year, completed 16 of 30 passes for 193 yards, with two touchdowns and two interceptions. Josh Vann had five catches for 62 yards and a touchdown. But the Gamecocks rushed for just 57 yards against a defense that entered the game allowing 270 yards per game on the ground.

South Carolina: The Gamecocks had a chance to take control of the game in the first quarter with a 7-0 lead and the ball on Missouri’s 17-yard line. By that point, the Tigers had already heard boos from the home crowd after a sluggish start. But MU defensive end Isaiah McGuire burst through the South Carolina offensive line untouched and took the ball away from running back MarShawn Lloyd. The turnover gave the Tigers a fresh start.

Missouri: The Tigers’ quarterback situation remains muddled. After missing last week’s loss to Georgia with an injury, Bazelak returned to the starting lineup and got off to a shaky start. On the first drive, he inexplicably floated a pass right into the arms of defensive back Cam Smith. But he made up for that in the second quarter when he delivered a 60-yard touchdown pass to Cooper while getting hit in the face by South Carolina’s R.J. Roderick. But after Bazelak threw another interception in the fourth quarter, MU coach Eli Drinkwitz replaced him with Brady Cook.

South Carolina: The Gamecocks complete their SEC schedule with a home game against Auburn on Nov. 20.

Missouri: The Tigers play their home finale against Florida on Nov. 20.