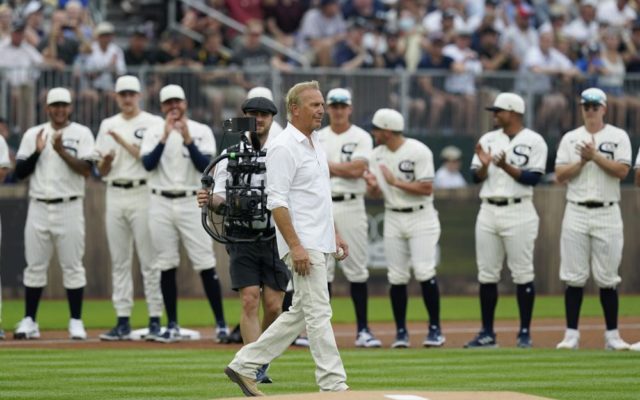 Actor Kevin Costner walks to the stands before a baseball game between the New York Yankees and Chicago White Sox, Thursday, Aug. 12, 2021 in Dyersville, Iowa. The Yankees and White Sox are playing at a temporary stadium in the middle of a cornfield at the Field of Dreams movie site, the first Major League Baseball game held in Iowa. (AP Photo/Charlie Neibergall)

(Radio Iowa) Last night’s Field of Dreams game in Dyersville featured eight home runs, including a final two-run homer in the bottom of the ninth that secured the 9-to-8 victory for the Chicago White Sox. Major League Baseball Commissioner Rob Manfred says there’ll be a Field of Dreams game again next year, likely in August.

“It’s just been so successful that it’s hard not to take the opportunity to do it again,” he said during a news conference before the game. The commissioner did not reveal which teams would play in a second Field of Dreams game.

“The reception that this event has received has been so positive that we will be back,” Manfred said. “I think it’s pretty clear we’ll be back next year and we’ll have to talk about it after that.” Kevin Costner, star of the iconic 1989 movie that inspired last night’s game, says there’s nothing like tradition.

“It does feel like all the teams are going to want to touch this,” Costner said. “There’s going to be hot competition to play here.” On Wednesday, Costner toured the field built on the same property as the baseball diamond originally constructed for the movie. Last night, Costner played a role in opening the Fox Sports national broadcast of the Field of Dreams game. During the news conference before the game, Costner used the word nuanced to describe the field and the entire event.

“Field of Dreams all the way through from the movie to this moment has had the benefit of people who are very careful,” Costner says. The White Sox and the Yankees wore special retro uniforms for last night’s game and the players entered the field through the rows of corn surronding the outfield. Eight-thousand were in the stands for the game a few miles outside of Dyersville. Hundreds more set up lawn chairs in the City Square in Dyersville to watch the game on a big screen. Karen Kramer has lived in Dyersville for 30 years and she says the event is about much more than baseball.

“I’m watching groups of families come in,” she says. “The whole movie is really about that and I think that’s what we’re finding.” Ken Graves connects the underlying theme of the movie to his own experience. He’s been playing baseball since he was five.

“That was a gift that my Dad gave to me and my Dad has been gone for like 23 years,” he says. “You know, there are some things that maybe you didn’t want to say, but you said at the time, and you wish you could take it back — and you wish you could have somebody come back.” Costner, the movie’s star, suggests a film without car chases or explosions still connects with audiences because it’s about a father and a son getting a second chance to deal with unfinished business.