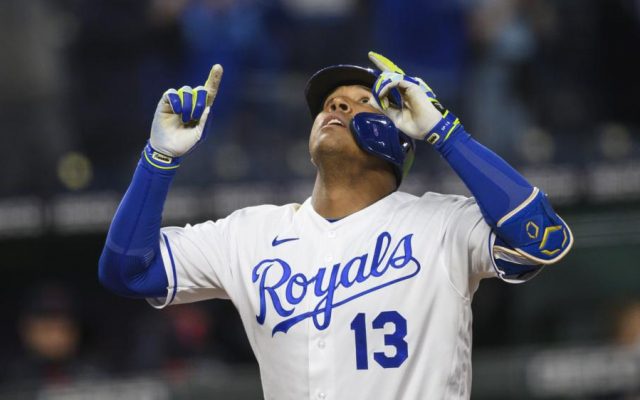 Kansas City Royals Salvador Perez celebrates after hitting a home run to give the Royals a lead over the Cleveland Indians during the fifth inning of a baseball game Tuesday, May 4, 2021, in Kansas City, Mo. (AP Photo/Reed Hoffmann)

Major League Baseball’s players and owners ended the lockout Thursday when the players’ association accepted management’s offer to salvage a 162-game season that will start April 7.

The work stoppage ended at 7 p.m. closing the 99-day lockout that delayed spring training and threatened to cancel regular-season games for the first time since 1995.

Training camps will open today, with players mandated to report by Sunday.

Opening day was pushed back just over a week from its March 31 date, to Thursday April 7.

With the deal a freeze on roster transactions ended Thursday night which will allow more than 100 free agents to begin singing with new teams.

The deal brings major changes to the game including universal designated hitter, increasing the playoffs from 10 teams to 12, advertisements on uniforms, a balanced schedule that reduces intradivision play starting in 2023 and measures aimed to incentivize competition and decrease rebuilding, such as an amateur draft lottery.

The luxury tax threshold rises from $210 million last year to $230 million this season, the largest yearly increase since that restraint began in 2003. The threshold rises to $244 million by 2026

The players’ executive board approved the five-year contract by a 26-12 vote. Owners voted 30-0.