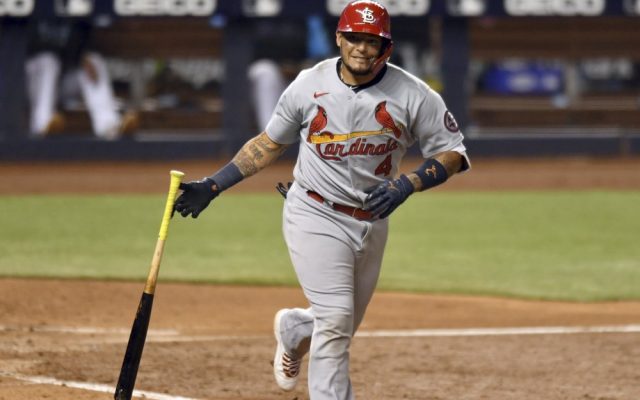 St. Louis Cardinals' Yadier Molina drops his bat after hitting a sacrifice fly during the sixth inning of the team's baseball game against the Miami Marlins, Tuesday, April 6, 2021, in Miami. (AP Photo/Jim Rassol)

Dylan Carlson hit his second homer of the season for an insurance run in the ninth.

Alcantara was traded by St. Louis in a package to Miami for Marcell Ozuna in December 2017, three months after making his major league debut with Molina behind the plate.

“We had him over here, and since then he’s really developed his skill set,” Cardinals manager Mike Shildt said. “He’s a really, really good pitcher with a good arm and really nice stuff.”

The 25-year-old Alcantara (0-1) tied a career high with 10 strikeouts in the first five innings, shutting out the Cardinals on two hits. Tommy Edman and Paul Goldschmidt opened the sixth with infield hits and a walk to Nolan Arenado loaded the bases with no outs.

“I just take it pitch by pitch and work as effectively as possible,” Alcantara said. “I’m pretty focused right now and I really want to go deep in games. That (sixth inning) the game kind of got away from me.”

A passed ball gave the Cardinals a run and Paul DeJong’s RBI grounder made it 2-all. Molina, who also had two hits, hit a flyball that put St. Louis ahead.

“That sixth inning we were able to battle and then find a way to win it,” Arenado said. “Just quality at-bats from top to bottom, and against one of the better pitchers we’ve seen in a long time. He didn’t give us a whole lot of chances out there tonight.”

Cardinals starter pitcher John Gant struggled with his command early but worked his way out of a no-out, bases-loaded jam in the third. He struck out four but walked three over his four innings, and benefitted from a pair of early double plays.

“A blue-collar effort by him, for sure,” Shildt said. “He battled out of the jams and kept us in the game.”

Ryan Helsley (1-0) won in relief and Alex Reyes went 1 1/3 innings for his second save.

Miami got a gift run in the first when left fielder Tyler O’Neill made two errors on the same play. After misplaying Starling Marte’s sharp line drive, O’Neill’s throw sailed to the backstop as Corey Dickerson raced home.

The Marlins added a run in the fifth when Jazz Chisholm, who doubled for Miami’s only extra-base hit, had a bases-loaded sacrifice fly.

Miami manager Don Mattingly praised the effort of Alcantara, who after a no-decison in the opener last Thursday was in control through the first five innings.

“He was filthy. He deserved better,” Mattingly said. “We had a lot of chances to take the pressure off him early. He was really, really good. It was one of those games we had a chance to add on but couldn’t.”

Cardinals: LHP Kwang Hyun Kim pitched in a simulated game, but Shildt had no specifics on the outcome in his pregame presser. Recovering from back stiffness, Kim had been expected to throw approximately 75 pitches.

Marlins: RHP Elieser Hernandez is improving after going on the 10-day IL Monday with right biceps inflammation, Mattingly said. The Marlins starter was to undergo an MRI at some point Tuesday just to confirm the initial diagnosis. … IF/OF Garrett Cooper returned to the lineup after fully recovering from side effects of a COVID-19 vaccination. RHP Jordan Holloway was optioned to the alternate training site.