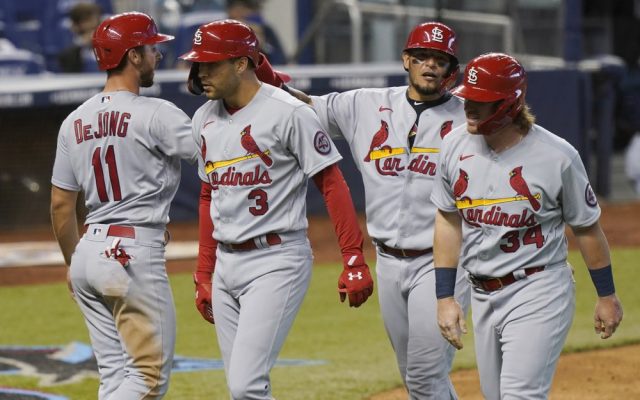 MIAMI (AP) — Yadier Molina hit a two-run homer and Dylan Carlson added a grand slam, leading the St. Louis Cardinals over Miami 7-0 Wednesday for a three-game sweep that dropped the Marlins to 1-5 for the first time since 2015.

Jack Flaherty (1-0) allowed one hit in six innings, a leadoff single by Corey Dickerson, who advanced on a walk before he was caught stealing. After another walk, Flaherty settled down. He allowed only two more runners, both on walks, and struck out six.

Flaherty had given up six runs over 4 1/3 innings at Cincinnati on opening day.

“Early on I wasn’t locating my fastball,” Flaherty said. “The last game was the same thing. As the innings went on, I was able to attack more, establish my fastball and pitch off of that. I got to a lot better counts.”

St. Louis allowed three runs against the Marlins after giving up 27 in the opening series.

St. Louis had advanced just one runner to scoring position before the seventh.

Molina homered for a 2-0 lead in the seventh and drove in the go-ahead run in each game of the series. Matt Carpenter had drawn a out-two walk, ending a string of 10 batters retired by López.

“Yadi got the big blow and the guys continued to fight,” Cardinals manager Mike Shildt said. “López was good. They threw some good pitching at us.”

Carlson connected against Zach Pop in the ninth, homering for the second consecutive game. He has three hits this season, and all are home runs.

“We put together some good at bats in that inning,” Carlson said. “I worked that back from an 0-2 count. I was really proud of that.”

Miami went 1-for-22 with runners in scoring position in the series. Cardinals right fielder Justin Williams made the game’s final out with a diving catch off Jon Berti’s sinking line drive with Jesús Aguilar on second.

“It definitely didn’t go the way we wanted, disappointing to start the season like this,” Miami manager Don Mattingly said. “I thought we’d be a little more consistent and that’s the part that kind of surprises me.”

Paul Goldschmidt also had an RBI single for St. Louis.

Nolan Arenado singled in the fourth and has hit safely in his first six games as a Cardinal.

STILL IN THE LINEUP:

“If this were a 1 o’clock game, we would have given it consideration,” Shildt said of resting Molina. “We are going to be intentional giving him some blows. The guy is in a real good place. He loves to play.”

Cardinals: (LHP) Kwang Hyun Kim (back stiffness) is expected to return with the team to St. Louis for the club’s first homestand but there is no announced timetable to activate him from the injured list. Kwang pitched against minor leaguers Tuesday at the team’s spring training facility in Jupiter, Florida.

Cardinals: RHP Adam Wainwright (0-1, 20.25) will start the home opener against Milwaukee on Thursday. Wainwright allowed six runs and seven hits and was pulled after 2 2/3 innings at Cincinnati.